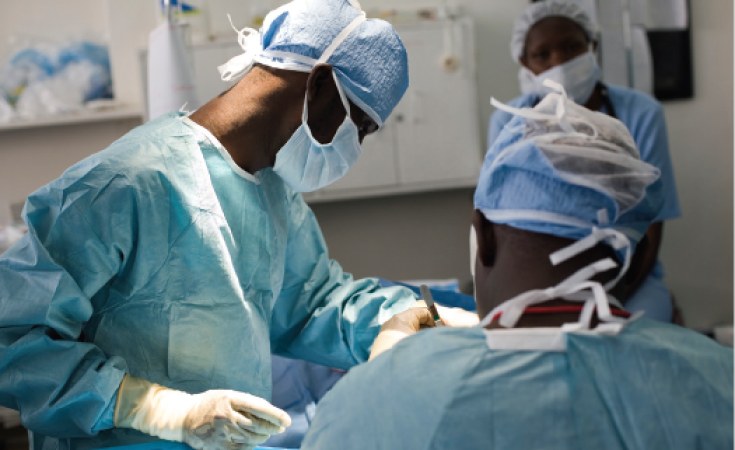 Recently, while surfing Twitter, I saw a tweet about reforms needed within the Nigerian medical community. These included respecting medical interns (house officers), adopting more casual dressing by medical doctors and a call on consultants to stop the abuse of residents, house officers and medical students. The tweet brought back for me painful memories of how junior doctors and medical students are routinely bullied by senior doctors in Nigeria’s medical community.
I could not resist responding to the tweet - I asked junior colleagues to stop calling their seniors, Chief.

I followed up with a tweet of my own, urging senior medical doctors to be the change and ask their juniors to stop using “Chief” when communicating with them.

Dear Nigerian senior medical doctor, when your junior colleagues call you, Chief. Please rebuke them and ask them to call you by your first name. Tell them you are NOT Babalowa, Boka or Dibia. Please be guided.
9:11 AM - 22 Dec 2018

Nineteen years ago, I graduated as a medical doctor. Throughout medical school and during my housemanship training, I was compelled to address my senior colleagues as “Chief” at ward rounds, in clinics and even outside the hospital premises. It was taboo to call your senior colleagues by name. Nineteen years later, it remains a taboo.

As expected, there were diverse responses to my tweet. While some doctors felt that there was nothing wrong with the practice of calling senior colleagues Chief, others felt it was an impossible task to stop it. A few agreed it was an unhealthy practice.

First names in a Nigerian hierarchy? Hell will freeze over first.

Kevin Obi-Enwereji‏ @EnwerejiKevin 23 Dec 2018
Replying to @ekemma
I don't see anything wrong with that. I call my seniors CHIEF and my juniors call me CHIEF too. It doesn't make me bully them.

I encourage healthy and free communication between myself and my Doctors. Being a senior doesn't make one untouchable or am oracle. Seniors must do better. Besides. Chief no be name. Nice one sir.

Where I train, you even call your Prof. and Junior consultant by their First name after Doc. Or short forms of their names. But this is gonna spark another WWIII in our system!

Ayọ̀mídé Joe‏ @Ayomidejoe 22 Dec 2018
Yes sir, someone once asked if I was a doctor when I was referring to someone else as chief, she said "it's you guys who usually use that word for each other"

I do not know the origin of this practice. Frankly I am not sure anyone really knows. One thing I know is that if we are serious about creating a better working environment amongst doctors, then this is one thing that needs to change.

A survey on emigration of Nigerian medical doctors conducted by Nigeria Health Watch and NOI Polls showed that approximately 9 out of 10 doctors had either emigrated or were in the process of emigration. Seven percent of 705 junior and senior medical doctors who completed an online questionnaire gave “poor relationship among colleagues” as the reason for emigrating to other countries.

In the same survey, in-depth interviews were conducted with 26 doctors. A female resident doctor at one of the tertiary hospitals in Nigeria unpacked the poor relationship among colleagues in this way: “First of all, the working conditions are harsh… Medical ethics in Nigeria is practically dead. There’s a lot of oppression practiced in medicine, and it’s been occurring from generation to generation. This cycle is perpetuated as the oppressed over time become the oppressors. The root cause of this oppression may stem from the fact that you spend all of your time and dedicate all of your life, away from family and friends to this profession, only to find out that it is just not worth it at the end. This manifests in them lashing out at junior doctors. So, the relationship between senior and junior doctors is very bad.”

I had firsthand experiences of this type of bullying by residents, senior residents and consultants.  As a medical student, there were senior doctors that I was terrified of and dreaded attending their classes, ward rounds or clinics. At almost every encounter, we medical students would be called names, shouted at and made to doubt our capacity. The bullying becomes a vicious cycle because junior doctors who complained of being bullied end up as bullies themselves once they become consultants.

Another doctor who responded to my tweet echoed these thoughts:

Olúgbeǹgá‏ @ayooluwa96 22 Dec 2018
Replying to @ekemma
Lol. It's meant to soothe the person's ego before the chief will start some medical bullying.

The shortest, and perhaps most revealing response to my tweet was by a neurologist who simply responded, “no”. He is a senior doctor involved in the training of junior doctors. Such a response shows there is still much to be done for change to happen.

It is pertinent to listen to concerns of junior doctors in order to improve relationships with senior colleagues. I currently work with Nigeria Health Watch, a health communications and advocacy non-profit, and EpiAFRIC, a public health consulting firm. In both organisations, colleagues are addressed on first name basis. I can’t remember the last time a colleague addressed me as “Dr. Nsofor”. Despite this, we have excellent working relationships and are productive. This means that colleagues are able to come to me with questions and suggestions to make our work better, and even banter, without my title creating an “Oga (boss)” mentality that usually stifles interaction and openness at the work place.

Some doctors who responded to my tweet felt it is too radical to transition from “Chief” to first name between junior and senior doctors.  They advise we start with “Dr. First name”.

Chinemerem‏ @Chisq4impact 22 Dec 2018
Replying to @ekemma
We already have a replacement for it. “Dr. First name” seems to suffice

If the formality among medical doctors must be maintained, perhaps it should be “Dr. Last name” but definitely not, “Chief”. Hopefully if this is done, it can become the first baby step towards an end to bullying in the medical community and towards a healthier workplace for the doctors who spend their days working to keep everyone else healthy.

Tagged:
Copyright © 2019 Nigeria Health Watch. All rights reserved. Distributed by AllAfrica Global Media (allAfrica.com). To contact the copyright holder directly for corrections — or for permission to republish or make other authorized use of this material, click here.