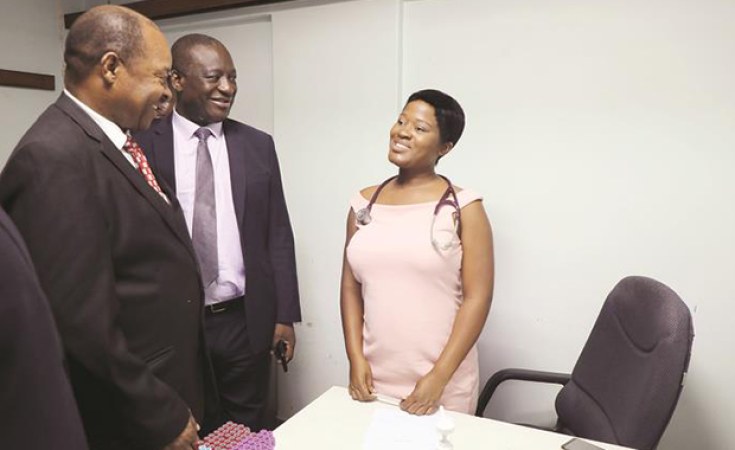 All doctors who had withdrawn their labour from Government hospitals have now returned to work. This follows an announcement by their association yesterday calling off the 40-day industrial action. A survey of central hospitals -- Harare, Parirenyatwa, Chitungwiza, Mpilo and United Bulawayo Hospitals -- by The Herald, confirmed that doctors who took part in the illegal strike had returned to work although a majority of them were still undergoing scheduled disciplinary hearings.

In some instances, the doctors were advised to proceed to their workstations before the hearings as tribunals were overwhelmed by the high number of returnees presenting themselves for the hearings.

Senior doctors, who had stopped reporting for work in solidarity with their juniors, have also resumed work.

Hospitals have also started admitting patients, while in their casualty and outpatient departments, the situation was returning to normal.

In a statement yesterday calling off the strike, the Zimbabwe Hospital Doctors' Association (ZHDA) acknowledged the commitments made by Government to address critical issues which the doctors raised and called for their full implementation.

"The Ministry of Health and Child Care has made commitments to its employees to address these crippling factors and we can only hope that these commitments would be implemented in all honesty at the correct time frames and as agreed, for the benefit of our patients and the country as a whole," said ZHDA.

They also called for continual dialogue between them and the employer to avoid unnecessary disruption of healthcare services.

"We believe that, if these crucial commitments are implemented, it will go a long way in alleviating the challenges our members encounter when discharging lifesaving duties in Government hospitals. Industrial action by doctors should not be the only language that brings about improvement in drug supply and conditions of service. Good dialogue, transparency, honesty and accountability should be incorporated to provide a platform that improves service delivery," read the statement.

The doctors expressed concern over failure to review their salaries and the issue of their December salaries which were withheld. They said some of them would find it difficult to report for duty daily, although they had officially called off the strike.

"Indeed, poor remuneration and the current fuel shortages remain a threat that may spontaneously hinder our members from reporting to work daily and discharging quality health services to patients," they said.

"That being said, our members have begrudgingly resumed work with effect from today (Wednesday) as dialogue continues."

Health and Child Care Minister Dr Obadiah Moyo, who toured Parirenyatwa and Harare hospitals to assess the situation, hailed the latest move by the junior doctors saying Government had always wanted them back at work.

Dr Moyo said Government remained committed to fulfilling the commitments it made under the collective bargaining agreement. Health Services Board chairperson Dr Paulinus Sikosana confirmed that all doctors had resumed work at all health institutions in the country.

"We have been in touch with the clinical director from Mpilo Central Hospital and he gave us a satisfactory picture, at UBH doctors are trickling in. We wanted the docs to come back to work and serve patients," said Dr Sikosana.

Dr Sikosana said the agreement signed by both parties last week had closed the chapter on this particular strike.

The junior doctors downed tools on December 1 last year demanding a review of their salaries and an improvement of working conditions. Later on their seniors and radiographers joined the strike with the same demands.

Although the strike was declared illegal by the Labour Court, the doctors insisted that they were incapacitated to report for duty, further demanding to be paid their salries in US dollars. This was rejected by Government.

The doctors however started reporting for duty on Monday.

Senior Doctors Down Tools in Zimbabwe
Tagged:
Copyright © 2019 The Herald. All rights reserved. Distributed by AllAfrica Global Media (allAfrica.com). To contact the copyright holder directly for corrections — or for permission to republish or make other authorized use of this material, click here.