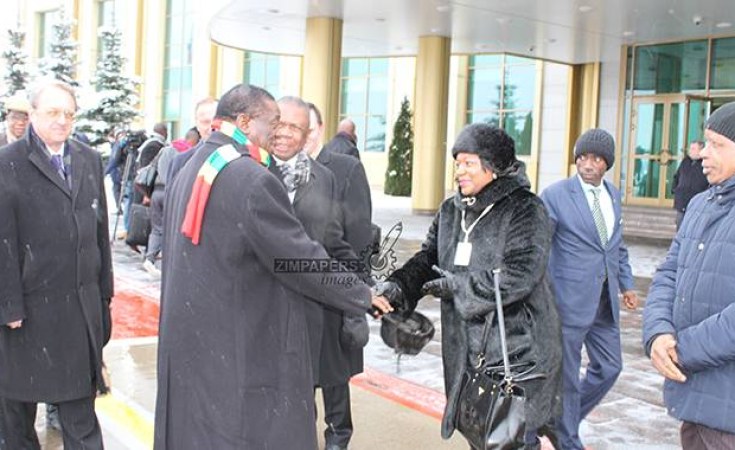 Moscow, Russia — The recent decision to increase the prices of petrol and diesel was necessary and the conditions demanding that pronouncement presently remain unchanged, the President Mnangagwa has said.

Addressing international media here last night, President Mnangagwa said the prior lower prices of petroleum products had made Zimbabwe attractive to external consumers who flocked into the country to buy petrol and diesel cheaply.

This comes as experts and economic analysts have thrown their weight behind a fuel audit directed by the President, saying this is a giant step towards ending rent-seeking behaviour on Government subsidies.

The Head of State and Government indicated that black market currency dealings had contributed to a gross distortion of the fuel price, making it the lowest in the region.

The new retail prices are $3,31/litre (previously $1,34) for petrol and $3,11/litre (previously $1,49) for diesel. Last night, President Mnangagwa said: "The recent price increase was necessary and remains necessary. In our region, before two days ago, the price of fuel was about 60 (US) cents per litre, the lowest in the region.

"We have now brought it to the level of about US$1,30, which is the average in the region. The level of 60c per litre, even surrounding consumers of fuel would find it cheaper to come into Zimbabwe to access that fuel.

"As you are aware, we depend on hard currency (to buy fuel) which we do not produce, but (which we) earn through exports. So we have very limited capacity in acquiring hard currency. But we have enough hard currency resources for our domestic market.

"At the level at which now we have priced our fuel, it will stabilise the aspect of fuel filtering to neighbouring consumers."

The President added that Zimbabwe was a country that was metamorphosing economically and politically, and the fruits of this would not be reaped overnight.

"You must realise that Zimbabwe is going through both political and economic reforms. These do not come easily. We have introduced austerity measures and it will take time for things to settle and results to show that this is where we must go to grow our economy and improve the lives of our people," President Mnangagwa said.

The President has granted tax rebates to various registered businesses so that they continue to supply goods and services at old prices without having to pass on the higher cost to consumers.

President Mnangagwa on Saturday said the Government would soon institute an audit on how the different fuel facilities had been utilised on the back of persistent fuel shortages despite Government pumping in millions of US dollars every month to import fuel.

The Head of State and Government said to curb misuse of fuel in the country, Government, through relevant departments, which include its security structures, had started on a comprehensive audit of all fuel draw-downs with a view to establishing points of leakages and promised punishment for criminal conduct.

Zimbabwe recently experienced a spike in fuel shortages as investigations showed the country had consumed almost 480 million more litres of petrol and diesel in six months between June and November last year than in the same period in 2017, a 77 percent extra, and more than US$200 million in foreign currency.

Analysts who spoke to The Herald urged a thorough probe and measures to stop future abuse of Government facilities.

In an interview, economist Dr Gift Mugano, said Zimbabwe had the cheapest fuel in the region when one factors in the parallel market exchange rate between RTGS balances and Bond notes to the US dollar.

"You don't liberalise where there are challenges like we have in our economy where the official rate is competing with what obtains on the parallel market," said Dr Mugano.

"Because of the difference in the official rate and the parallel market, you are bound to have rent-seeking behaviour where people take advantage and abuse facilities such as the ones we have had for fuel.

"So because we still have that difference in the official rate and the parallel market, chances are that we will still have distortions which corrupt people will seek to exploit. So it is very important that we have a thorough investigation of how the previous facilities have been used," said Mr Mugano.

"Once we get proof of corruption, which I am sure is there, we must fish out the culprits so that we won't have the same problems on future facilities, be they for fuel or any other essentials," he said.

Another economist, Mr Persistence Gwanyanya said there was need for the Government, in light of the President's call, to relook at how such facilities were managed.

"The fact that a need for investigation has been suggested is a sign that there is serious doubt on the conduct of the institution that is at the centre of these allocations," said Mr Gwanyanya.

"What it does is to simply question the RBZ as an allocator of foreign currency and or these fuel facilities," he said.

Another economist who declined to be named said there were many audit companies able to account to the last drop of fuel shipped into the country.

"Given that the RBZ has been key in allocating foreign currency to companies (fuel dealers), it should also be audited alongside the firms that benefited from the funds.

"If indeed State resources were abused, Government should not hesitate to send people to Chikurubi. Zimbabweans were deprived of quality health and life because someone abused his/her public office. That should end for Zimbabwe to move forward," he said.

Shutdown Forces Minister to Cancel Meeting With Unions Over Wages