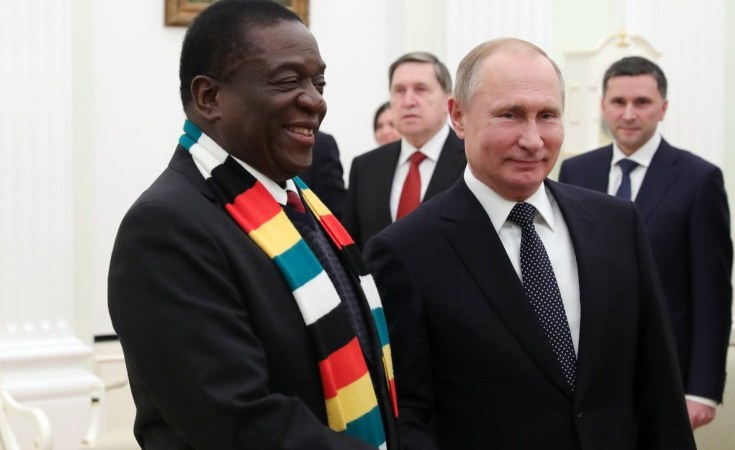 President Emmerson Mnangagwa on Tuesday showed little concern about the deadly unrest back home as he continued his widely criticised state visit to Russia and met counterpart Vladimir Putin in Moscow.

Ahead of the meeting with Putin, Mnangagwa told RIA Novosti news agency that he would be looking for financial support from Moscow.

"I can't say that we want this much or that much," the Zimbabwean leader said in an interview.

However, a report carried by another news agency, TASS, after the meeting made no reference to any financial bailout deal.

The two delegations reportedly signed a range of agreements to facilitate implementation of the Darwendale platinum project which is being developed by Russian firms.

"A memorandum of understanding was signed between the African Export-Import Bank and the Russian-Zimbabwean Great Dyke Investments on provision of project financing by this bank in the amount up to $192m," reported TASS.

"Great Dyke Investments also signed a memorandum with the African Financial Corporation on shareholding participation in the Darwendale project in the amount up to $75m.

"Furthermore, a memorandum was signed to secure political risks of Russia's VTB Group participation in the project."

Soldiers were patrolling the streets across the country as the main cities and towns remained deserted with shops closed on the second day of a shutdown called by labour unions and activists.

Information minister Monica Mutsvangwa told a press conference in Harare that three people, including a police officer, died Monday as violent protests rocked the capital after Mnangagwa more than doubled fuel prices before leaving for Moscow.

Rights groups however, put the death toll at 8 with more than 200 people reportedly arrested as the security services launched a crackdown against the protestors.

The blockade lasted all of Tuesday and appeared to be still in place Wednesday morning.

In Moscow, Mnangagwa, who has ignored calls that he returns home to deal with the crisis, downplayed the gravity of the situation.

"I understand this that there were some protests happening yesterday, but they are almost fizzling out and there is no country which has no challenging problems. These come and pass", he was reported as saying by Russian news agency Sputnik.

However, international condemnation of what rights groups described as a brutal crackdown increased with politicians in London and Washington expressing grave concern over government's response to the unrest.

British legislator Kate Hoey which chairs the all-party parliamentary group on Zimbabwe demanded a statement from the UK government.

In Washington Senators Chris Coons and Cory Booker urged the Zimbabwean government to respect the rights of protesters and restore access to social media, internet and telephone services.

"We are deeply troubled by reports of deaths, widespread arrests, beatings, and harassment of protestors by security forces of the Government of Zimbabwe," the senators said in a statement.

"The Zimbabwean people have the constitutional right to protest peacefully and express themselves regarding developments in their country.

"We also call on the Government of Zimbabwe to rescind the directive ordering communication service providers to cut or restrict access to social media, internet, and telephone services.

"Such abrogations of constitutional and basic legal rights are not what the people of Zimbabwe were promised under President Mnangagwa."