Zimbabweans in SA Weigh in On Fatal Protests 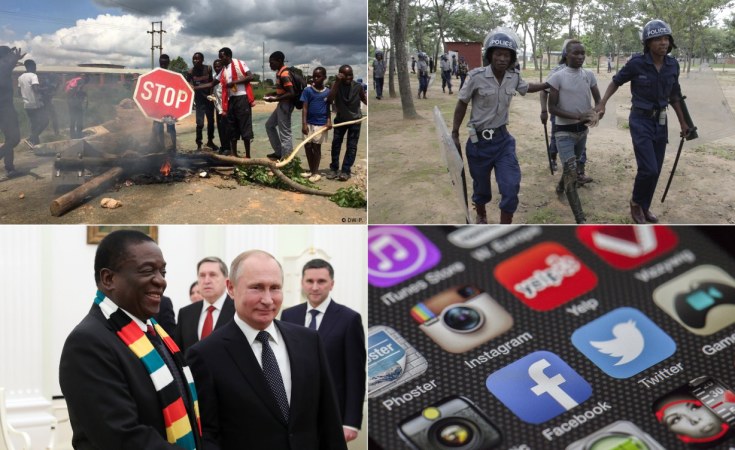 Johannesburg — ZIMBABWEAN economists and political activists in South Africa have blamed controversial policies by the beleaguered government for the deadly protests ravaging their home country.

This follows the deadly protests over Zimbabwe's economic problems, which have been worsened by the steep increase in the price of fuel, as announced by President Emmerson Mnangagwa last weekend.

Luke Zunga, the Global Zimbabwe Diaspora Forum (ZDF) chairman, said the increases by 150 percent to more than US$3 (about R42) were unjustifiable.

"The increase was quite unnecessary because the global price of crude fuel is going down, not up," Zunga argued.

The economist said Mnangagwa, whom he said was not a good orator, should have explained the reasons for the sharp increase, giving understandable reasons.

"After announcing the increases he went to Russia. Again no clear explanations what he wants in Russia," Zunga said.

Announcing the increase, Mnangagwa said, "Following the persistent shortfall in the fuel market attributable to increased fuel usage in the economy, and compounded by rampant illegal currency and fuel trading activities, government has today (Saturday) decided on the corrective measures."

"Unfortunately the President (Mnangagwa) is not a good orator and can't explain his intentions and speak loud enough for people to know what his mind has for the nation. We are told that he will not engage Diaspora. He will engage only those in Zimbabwe," Zunga said.

Zunga noted reports of plans by Zimbabwe Minister of Justice, Ziyambi Ziyambi, to draft constitutional amendments to strip Zimbabweans in the Diaspora for five years, backdated from 2013, unless they paid so-called Diaspora taxes to be announced.

Zunga said this was unfair as there were no provisions for Zimbabweans in the Diaspora to vote.

"They have killed the economy... .people run away. Some survive by the thread of their hair to escape murderous state security squads and ZANU-PF operatives. Why should escapees pay taxes to the country they escape from? Why should their citizenship of birth be stripped? It is crazy!" Zunga added.

"It (Zimbabwe government) is the enemy of the working class, who have rejected it in every election," Mabhena said.

Mabhena blamed the scarcity of fuel to the currency question. Zimbabwe abandoned its dollar currency after record hyperinflation a decade ago.

"It is nonsensical for the government of Zimbabwe to keep on arguing that the Bond Note is equal in value to the US Dollar. What needs to be done is to abolish the Bond Note or let the market forces determine its value and adopt the South African Rand as a currency of reference," Mabhena said.

Meanwhile, a handful Zimbabweans living in South Africa converged outside Union Building in Pretoria to protest the challenges confronting their kith and kin back home.

The protest march later moved to the Zimbabwe embassy.

Police, Protesters Clash In Zimbabwe Shutdown Protests
Tagged:
Copyright © 2019 CAJ News Agency. All rights reserved. Distributed by AllAfrica Global Media (allAfrica.com). To contact the copyright holder directly for corrections — or for permission to republish or make other authorized use of this material, click here.