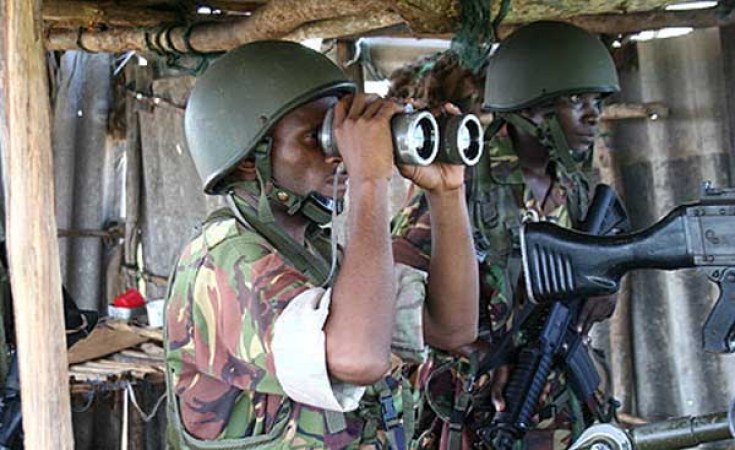 Kenyan President Uhuru Kenyatta says the deadly attack and siege on a hotel and office complex in the capital Nairobi has ended.

Kenyatta said all the "terrorists" who took part in the attack on the DusitD2 complex had been "eliminated."

The U.S. State Department confirmed late Tuesday that one American was among the dead, but has not identified the victim. A British citizen was also reportedly killed in the attack.

The Islamic extremist group al-Shabab is claiming responsibility for Tuesday's attack, which began in mid-afternoon with an explosion outside a bank and a suicide bombing in the hotel lobby.

Four gunmen could be seen on surveillance video walking through the parking lot with at least one stopping to open fire.

Terrified office and hotel workers and guests ran for cover, streaming from the buildings, climbing out of windows, ducking behind police vehicles and anything they could find while gunfire echoed off the walls.

Police found a sad and grisly scene inside one of the restaurants -- wounded and dead diners at their tables, slumped over unfinished meals.

Other witnesses say they found human limbs lying on the ground.

Witness Duran Farah told VOA he and some colleagues were entering the complex at the time of the attack.

"A loud explosion happened at the gate. Next there was shooting, an exchange of fire, a lot of fire, and we see people rushing and running around in every direction," he said. He and his friends escaped by running down an alleyway.

The DusitD2 hotel and shops are in an upscale Nairobi neighborhood popular with American, European, and Indian tourists, although exactly who was targeted and why is unclear.

Fresh Gunfire Heard as Kenyan Attack Survivors Rescued
Tagged:
Copyright © 2019 Voice of America. All rights reserved. Distributed by AllAfrica Global Media (allAfrica.com). To contact the copyright holder directly for corrections — or for permission to republish or make other authorized use of this material, click here.