Zimbabwe Opposition - We Are Not to Blame for the Violence 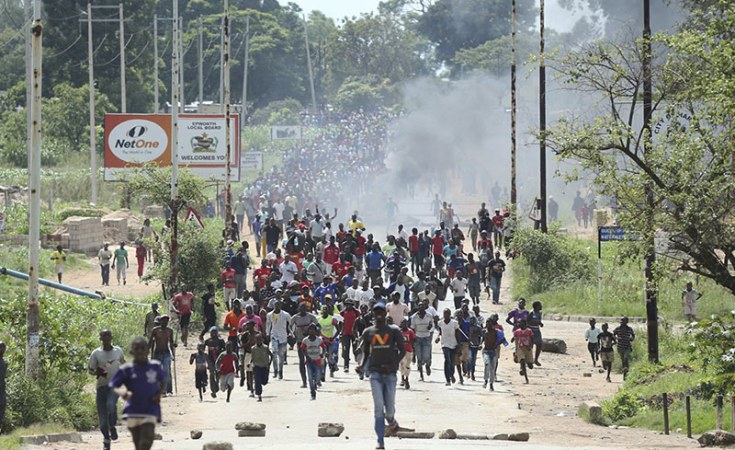 Zimbabwe's opposition says that it is not responsible for violent protests over fuel price hikes. An analyst tells DW the government is using tactics "reminiscent of the Mugabe administration."

Relative calm returned to Zimbabwe's capital Harare on Wednesday after two days of deadly street protests with opposition and government blaming each other for stirring up the violence.

"The government has reacted in a heavy-handed manner, they have sent soldiers and police to fire tear gas into the suburbs. That has caused a reaction from some of the protestors. We have called for dialogue on the economic and political crisis in Zimbabwe," Jacob Mafume, a spokesman for Zimbabwe's main opposition party, the Movement for Democratic Change (MDC), told DW from Harare.

The government says that three people, including a police officer, died in violent protests against fuel price hikes and the economic crisis in the southern African nation on Monday. Amnesty International put the death toll at eight.

In Harare, schools, shops and petrol stations remained closed on Wednesday, with a heavy military presence in some areas. "The city is empty. This is a very frightening situation," a Harare resident told a DW correspondent. Many people were increasingly concerned about the effects of the stand-off as they ran out of food supplies and fuel. Police reportedly fired tear gas in Harare's city center at a crowd of people who had queued to buy bread at the city's only operating supermarket. Soldiers were deployed at the only fuel station still open.

Zimbabwe has been engulfed by a severe economic crisis for years. The country has been hit by a shortage of US dollars which replaced the local currency in 2009. As a result, medicines, fuel and other goods cannot be imported, leading to acute shortages. The country's unions had called for three days of 'stay at home' protests after an announcement by President Mnangagwa on Sunday that fuel prices would be hiked.

"It looks fairly likely that this was a spontaneous outburst of anger," Derek Matyszak, a researcher with the Institute for Security Studies told DW from Harare. "In any country, people would protest if fuel prices would go up by five or ten percent, so a 250 percent increase was obviously likely to spark unrest."

Matyszak said that the government's response had been "reminiscent of the Mugabe administration". "I am receiving reports of the military breaking into people's homes and beating them up because they are suspecting them to be part of the demonstrations", he said.

On Wednesday, police arrested Evan Mawarire, one of Zimbabwe's leading activists, who is known for staging large-scale public protests against then President Mugabe's authoritarian rule in 2016. Police accused him of inciting violence through his social media accounts, according to his lawyer. The MDC wrote on Twitter that parts of its leadership had also been arrested. Internet services were shut down for a second day, with the country's leading mobile operator telling customers it was acting on orders from the government.

Civil society activists said that the protests had been the biggest unrest in Harare since August 2018, when security forces cracked down on opposition supporters protesting against the outcome of presidential elections.

Privilege Musvanhiri in Harare contributed to this report

President Says No Justification for Violence

South African Intervention a Silver Bullet for Zimbabwe's Crisis?
Tagged:
Copyright © 2019 Deutsche Welle. All rights reserved. Distributed by AllAfrica Global Media (allAfrica.com). To contact the copyright holder directly for corrections — or for permission to republish or make other authorized use of this material, click here.