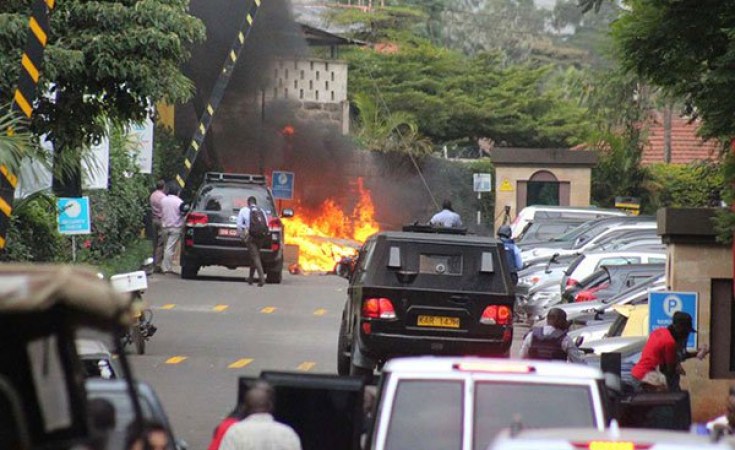 Dennis Onsongo/Nation Media Group
The scene of the terror attack at the DusitD2 hotel in Nairobi on January 15, 2019.
Capital FM (Nairobi)
By Njoki Kihiu

He slammed perpetrators of the attack saying their motive was to cause fear, but the country would not be bowed by their cowardly acts.

"Our thoughts and prayers are with the victims and their families at this extremely difficult time. We stand firmly on the side of Kenya and all people of goodwill in this war with evil that terrorists represent; we condemn in the strongest terms possible this dastardly act of cowardice perpetrated by enemies of human civilization," Odinga said.

While addressing the nation from his Capital Hill office, Odinga called on Kenyans to continue supporting each other.

"Their mission was to cause pain and fear and they proceeded to do so without seeking details; our survival depends on standing together against these agents of doom. We appeal to Kenyans to continue being each other's keepers and continue offering help where it is needed," he said.

Security officials, the international community and Kenyans at large were also commended by Odinga for coming together to ensure many lives were saved.

"We commend our security forces for the robust, rapid and coordinated response to this evil that saw lives saved and the country reassured; we commend our citizens for being each other's keeper and responding to appeals for blood donations and we appreciate the professionalism of our care givers and first responders; we also thank the international community for standing with Kenya at this critical juncture," Odinga commended.

President Kenyatta had earlier announced that the operation had ended with all the assailants having been eliminated.

"The security operation at Dusit complex is over and all the terrorists have been eliminated. We have confirmation that 14 innocent lives were lost through the hands of these murderous terrorists with others injured," Kenyatta stated.

His address came hours after police confirmed that two of the last terrorists in the complex had been shot dead, ending the siege at the complex that housed the 101 room dusitD2 hotel, offices and other businesses.

These Africans Are on TIME Magazine's Most Influential List
Infrastructure