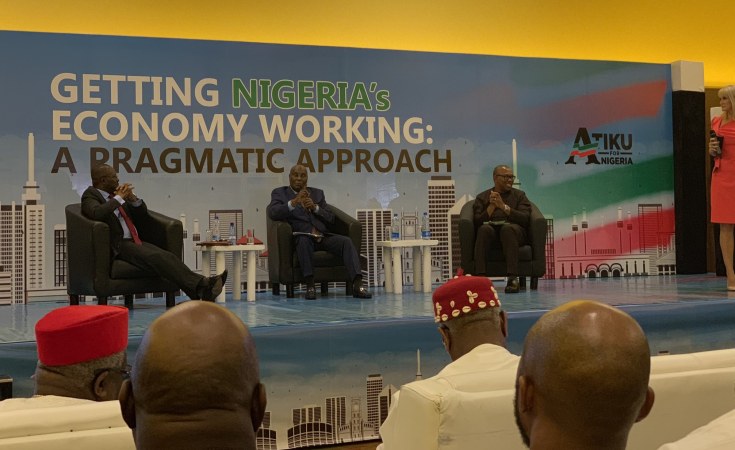 The Presidential and Vice Presidential candidate of the PDP; Alhaji Atiku Abubakar and Mr. Peter Obi, were at a meeting with the Business community Wednesday, in Eko Hotels and Suites. The meeting had the theme, Getting Nigeria's Economy Working: A Pragmatic Approach.

The business-savvy candidate from the time of launching his campaign has been bent on job creation. He stated earlier that he has created about 45,000 jobs as a private citizen. For many Nigerians, this is enough antecedent to hand over the reins of power to him, considering that every problem Nigeria faces now, can be traced to lack of jobs.

However, Opeyemi Agbaje; the moderator, wanted to know how involved he was in the creation of such plans. The reason is that governments have denied their policies and manifestos in the past. To this, Atiku replied, "This is not the first policy document I'm creating. I want to assure you I was personally involved and participated in crafting the ideas. I worked with the best experts as well." With this answer, the attendees and indeed other members of the public understood that the aspirant has owned his plans for Nigeria's economy.

Atiku continued on his experience with policies and documents, "in 2007, when I wanted to run, I worked with experts to produce the Niger Delta Master Plan. When I lost the elections, I handed it over to Yaradua. This document led to the reforms and creation of the Niger Delta Ministry." On the success and growth of the economy when he was in government, Atiku stated that the secret was that the government always met with the business community and always knew their needs as a result. This led to a 7% economic growth, as opposed to the current 1.8% economic growth rate.

On the gap in infrastructure in the country, Mr. Obi stated, "Fixing Nigeria's infrastructure must be private sector-led. That is what is obtainable elsewhere. Government does not have the capability to deliver the infrastructure we need now." Mr. Obi also stated that the idea of allowing government handle infrastructure is behind the debt burden of the economy which in turn reduces money that could have been spent on education and health.

On jobs, which is definitely the biting issue in the country, considering that 2018 saw the nation losing cumulatively 20.9m jobs, Mr. Obi stated that China used MSMEs to drive employment. He stated that small and medium scale enterprises, contribute 60% of China's economy and Nigeria should learn from them. He had earlier stated that he compares China to Nigeria because they were once as broke as Nigeria, with even more population.

Furthermore, popular actress, Onyeka Onwenu asked about Atiku's plans for women. Upon that, Atiku stated that he plans on giving 30% of appointment to women and 40% to youths, since they collectively contribute 70% to the population of the country. This is not far from what he has done as a private citizen, given that out of his 45,000 employees, 70% are people 25 to 30 years of age, with half of this population being women. Also, he directed that 80% of loans in a micro-finance bank he runs, be directed to women. He stated that this has led to 92% repayment by the women.

Peter Obi was clear on treating education as an investment, instead of expenditure. He stated that companies who are knowledge-based, make more money than Nigeria. Additionally, Atiku stated that they passed the Universal Basic Education law when he was VP. This law made it compulsory that kids get basic education. As such, he plans on making education a priority, since it is what Nigeria needs. In all of this, the government of Atiku Abubakar and Peter Obi plan to be watch dogs. Reducing the size and cost of governance is the first way to make progress in governance.

Atiku Vows to Privatise NNPC, Power, Others for Economic Growth

#AtikuInAmerica - Atiku Meets U.S. Officials, Nigerians
Tagged:
Copyright © 2019 Vanguard. All rights reserved. Distributed by AllAfrica Global Media (allAfrica.com). To contact the copyright holder directly for corrections — or for permission to republish or make other authorized use of this material, click here.