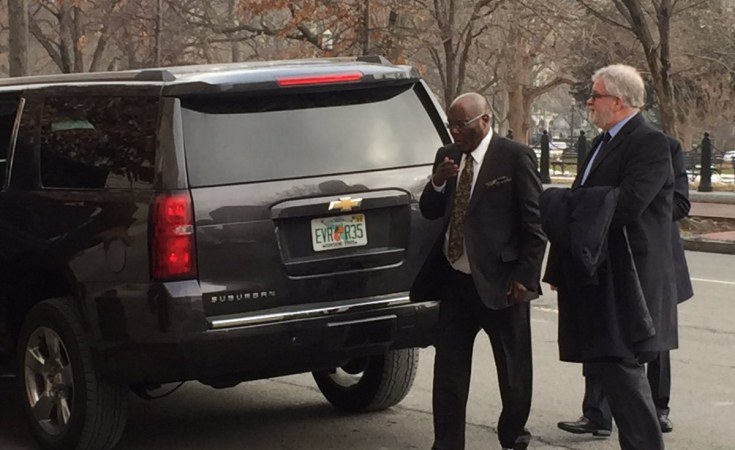 Atiku Abubakar has confirmed his arrival in the United States.

In a post on Twitter, he said: “Just arrived Washington D.C for meeting with US government officials, Nigerians living in D.C metropolis and the business community. -AA”, with a photograph, showing him clutching a bouquet of flowers, along with Senate President Bukola Saraki and a lady.

The Embassy of Nigeria in Washington DC had said it was not sure if the former Vice-President would be visiting the United States any moment soon.

Mr Abubakar, who is the presidential candidate of the opposition Peoples Democratic Party (PDP) was then being rumoured to have arrived in the United States on Thursday night. Some other reports said he was on his way.

“Actually, we have not received any information for the embassy but we are just trying to find out whether really he is coming. That is what we are doing right now.

“They told us he’s coming tonight, today, so we are trying to find out whether he’s really coming.

“Mr (Peter) Obi, (Atiku’s running mate), he was to come last week but the event was cancelled.

“So we are still trying to see but if you get anything, please just let us know also because they said he’s coming here so that if you’re able to get any updated information, just inform us so that we can prepare vehicles to go to the airport and meet him and all that.

“For now, we have no information. If I am able to confirm anything, I will get back to you and please, if you too get any confirmation or any update, just get back to me, just call me.

“As a former Vice President, the Embassy is supposed to organise to receive him at the airport and all that, but then we have not received anything in that regards,” the source said.

NAN reports that Mr Obi was billed to be in the U.S. last week and was scheduled to have a New Jersey/New York Townhall but the event was postponed.

The clarification from the embassy came as online reports said Mr Abubakar has either landed in the US or has taken off from Nigeria to address the US Chamber of Commerce on Friday, from 2:30 pm to 4 pm local time.

The Cable claimed that Mr Abubakar secretly flew out from Lagos on Wednesday night with most of his aides and associates taken unawares.

Mr Abubakar was said to have been issued last December with a US visa for the first time in 13 years. The visa was reportedly facilitated by his former boss, President Olusegun Obasanjo, a former foe, turned campaign endorser.

But reports said Mr Abubakar sensed the visa could be a trap by the Americans and thus asked for a guarantee from the US government that he would not be arrested over a case of money laundering, for which there were reports of a sealed indictment by the US Justice Department.

In another case, former congressman William Jefferson was jailed for 13 years for accepting a bribe from an investor, Lori Mody, who was wearing a wire. Mr Jefferson told the investor that he would need to give then Nigerian Vice President Atiku Abubakar $500,000 “as a motivating factor” to make sure the company obtained contracts for iGate and Mody’s company in Nigeria.

Mr Ibe told Daily Trust via a telephone chat Thursday afternoon that online reports which stated that Mr Abubakar had travelled to the US were a figment of the imagination of the authors.