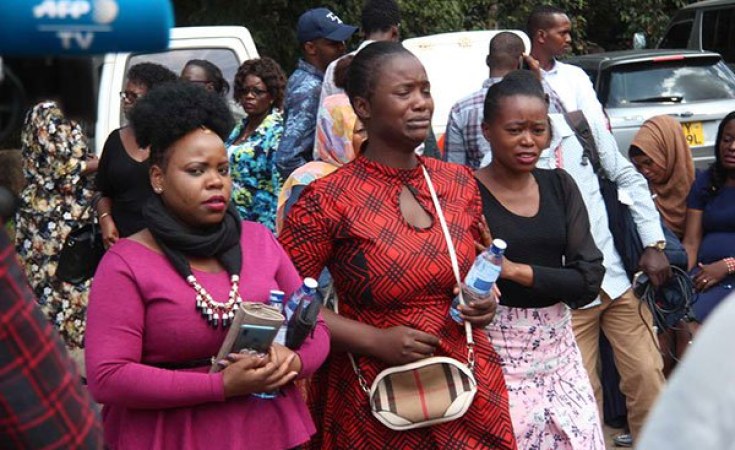 Nairobi — All the 94 cases of people who were reported missing after the dusitD2 complex terror attack have been closed positively.

In a statement, the Kenya Red Cross said the 94 were accounted for by 12.30pm Thursday, and they had already embarked on counselling of survivors and relatives of the 21 people who were killed.

So far, the organisation has offered counselling services to 595 people while anyone in need of such services has been asked to call the toll-free number 1119.

Many families were able to identify their loved ones at the Chiromo Funeral Parlour and will now wait for matching of their DNA samples to proceed with burial arrangements.

With two suspects in custody and more being pursued, police are optimistic that they will be able to dismantle the terror ring behind Kenya's latest attack.

Meanwhile, the United States Embassy in Nairobi on Thursday dismissed reports that they had information of an imminent terror attack at the complex.

In a statement, the embassy termed the claims as "false information that only serves to hamper the ongoing efforts to defeat terrorism."

Prior to the attack, the US said they had not cautioned any American citizen or staff to avoid the dusitD2 hotel prior to the incident.

"We deplore the spread of false information in the wake of this tragedy, which only serves to hamper ongoing efforts to defeat terrorism. We reiterate our deepest condolences to the families and friends of all those who were killed in this craven attack and wish a quick recovery to those who were injured. We stand shoulder to shoulder with Kenya," the statement read.

This comes even as the Al-Qaeda linked Al-Shabaab militants say the latest attack in Kenya was a reiteration against the US for moving their Israeli Embassy to Jerusalem.

It all started on Tuesday afternoon when heavily armed terrorists drove inside the 14 Riverside Drive complex aboard two vehicles.

A suicide bomber proceeded towards to the Secret Garden restaurant and blew himself up right outside killing five people.

This marked the beginning of the onslaught as people within the complex either decided to run or take cover.

The terrorists, were seen walking majestically towards the complex firing indiscriminately.

This went on for close to 20 hours until they were neutralized by Kenya's Special Forces with the help of their foreign counterparts.

Some 700 hundred people were safely evacuated.

On Thursday, detectives resumed their search within the complex with sniffer dogs and bomb experts.

Police warned of more safe blasts as they detonate explosives left behind by the five slain terrorists.

Meanwhile, DCI George Kinoti on Thursday urged members of the public to make available any information that may help the ongoing probe after the attack.

In an appeal posted on social media, the Directorate of Criminal Investigations assured anyone willing to share such information of confidentiality.