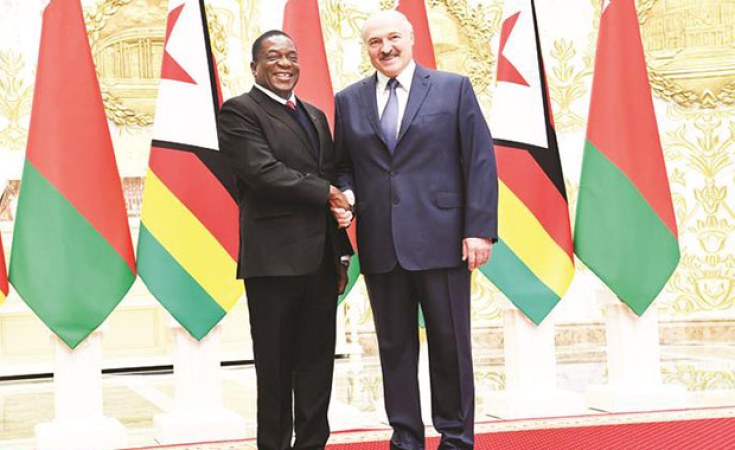 Lands, Agriculture, Water, Climate and Rural Resettlement Minister Perrance Shiri -- who is the Acting Minister of Foreign Affairs and International Trade -- signed for Zimbabwe while representatives from Belarus put pen to paper on their country's behalf.

Presidents Mnangagwa and Lukashenko oversaw the signing ceremony at the Presidential Palace here.

Beyond those agreements, which further enhance the burgeoning ties between Harare and Minsk, the two Presidents made significant headway in major infrastructure, industrial manufacturing, and agricultural projects that will change the face of Zimbabwe.

The grandest of the plans is a road and rail network -- being formulated under a tripartite arrangement involving Zimbabwe, Belarus and China -- to link the Indian and Atlantic oceans, across Southern Africa and through Zimbabwe.

The scheme, according to the Chief of Presidential Affairs of Belarus Mr Victor Sheiman, involves several Southern African countries and indications are that a number of regional leaders have already expressed support for it.

A joint venture company will in the coming weeks be registered to advance the ambitious project; as will about five other firms that will enter the agriculture, logistics and heavy machinery markets in a big way.

In addition, Belarus will also invest in irrigation systems, residential housing, roads (possibly with China), and a 100MW solar power plant, a control system and distribution network in Zimbabwe.

After meeting President Lukashenko, President Mnangagwa said Zimbabwe would walk the talk on the agreements, adding he had invited the Belarussian leader to visit Harare at his earliest convenience to further consolidate the relationship.

"This is how it should be between friendly countries," President Mnangagwa said.

"Zimbabwe shall benefit immensely from the experience that Belarus has had. They have gone through similar challenges as we are presently going through.

"It is the desire of my administration to widen and deepen our economic cooperation. There is no doubt in my mind that we shall walk the talk on the thing we are talking about here."

President Lukashenko said Belarus considered Zimbabwe an important and strategic partner in Africa, and he was ready, willing and able to support the country's economic development agenda.

He added: "We are loyal and sincere friends and partners of Zimbabwe."

He lauded the ease of doing business reforms in Zimbabwe, and rallied his countrymen to invest in the country.

Mr Sheiman said, "We have unique opportunities to establish a very wide-ranging economic cooperation with Zimbabwe. Our economies are complementary. Zimbabwe is interested in Belarusian vehicles, such as trucks, tractors, utility vehicles, etc.

"Zimbabwe is actively updating legislation to attract investment, to give a green light to joint ventures."

He said Zimbabwe under President Mnangagwa had strictly honoured agreements reached with Belarus, and he was confident the major infrastructure, agriculture, industrial, transport and logistics projects that were being rolled out on a commercial basis would succeed.

Mr Sheiman said more machinery would soon make its way to the Hwange coal and Marange diamond fields, while service and training centres to get the best out of the equipment would be established.

A Belarussian firm, he added, was conducting geo-survey work on 270 000 square kilometres and had already made preliminary findings of prime gold, chrome and lithium deposits in Zimbabwe.

Further, in February a transport company with an initial 1 000 trucks would be registered so as to facilitate commerce via ports; while a logistics firm would establish a hub that would service the region at a scale allowing companies and countries to plan for orders and movements even years in advance.

Mr Sheiman indicated that over the coming days, Zimbabwe and Belarus would conclude major agreements on joint production and processing of beef, poultry, pork, dairy, horticulture, fruits, wheat and maize.

President Mnangagwa concludes his State visit to Belarus today, heading for Kazakhstan where he and President Nursultan Nazarbayev will discuss areas of co-operation.

Thereafter, he makes his way to Azerbaijan for talks with President President Ilham Aliyev, before rounding off the trip with a second appearance at the World Economic Forum in Switzerland.

Revolt and Repression in Zimbabwe

South African Intervention a Silver Bullet for Zimbabwe's Crisis?
Tagged:
Copyright © 2019 The Herald. All rights reserved. Distributed by AllAfrica Global Media (allAfrica.com). To contact the copyright holder directly for corrections — or for permission to republish or make other authorized use of this material, click here.