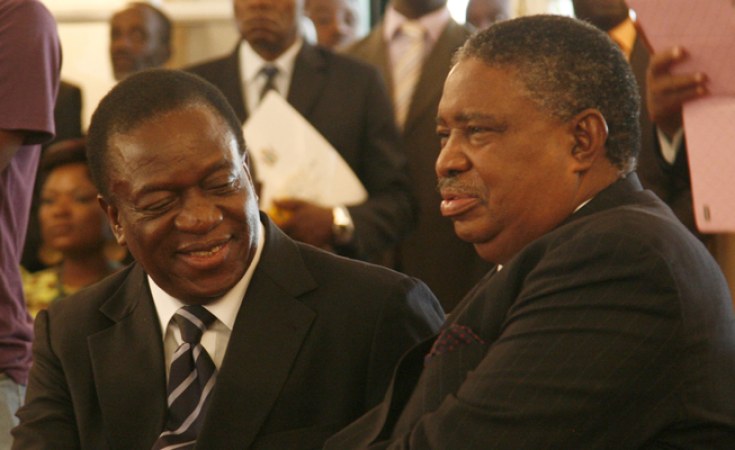 Photo: The Finacial Gazette
Phelekezela Mphoko (right) was, along with current President Emmerson Mnangagwa (left), one of two vice presidents at the time of the ouster of Robert Mugave Mugabe in November 2017.
New Zimbabwe (London)
By Staff Reporter

FORMER state Vice President Phelekezela Mphoko and family have finally quit Choppies Supermarkets Zimbabwe, bringing to an end a protracted battle for control of the Botswana owned retail giant between the parties.

This was revealed in a press statement this week by lawyers representing the embattled ex-VP and son on one hand and Nanavac Investments (Pvt) Ltd, trading as Choppies Supermarkets Zimbabwe on the other.

Until only recently, Mphoko was long believed to be the major shareholder within a retail giant that has often been targeted for looting by some Zimbabweans out to vent their anger on a one time senior member of a governmnet they accuse of being the source of their misery.

When relations went sour between the firm and the ex-government official, it emerged Mphoko was only offered 7% shares from the company as thank you for facilitating its entry into Zimbabwe and to dodge the country's tough indigenisation laws which prescribed at least 51% ownership by locals.

Choppies Enterprise chief executive officer Ramachandran Ottapathu recently said in a letter to the press that the Mphokos were given 51% of the shareholding "on paper", to meet Zimbabwe's tough empowerment laws, but their actual shareholding was 7%.

Mphoko was adamant he had the lion's share of the company's Zimbabwean unit.

The matter spilled into the courts.

However, the parties have since found common ground, paving way for the Mphokos' eventual exit.

The deal was announced by the parties' lawyers, Welshman Ncube of Mathonsi Law Chambers representing the ex-VP and Munyaradzi Nzarayapenga of Dube-Banda, Nzarayapenga and Partners who represented Choppies.

Zimbabwe Charges Former Mugabe Deputy With Abuse of Office
Tagged:
Copyright © 2019 New Zimbabwe. All rights reserved. Distributed by AllAfrica Global Media (allAfrica.com). To contact the copyright holder directly for corrections — or for permission to republish or make other authorized use of this material, click here.