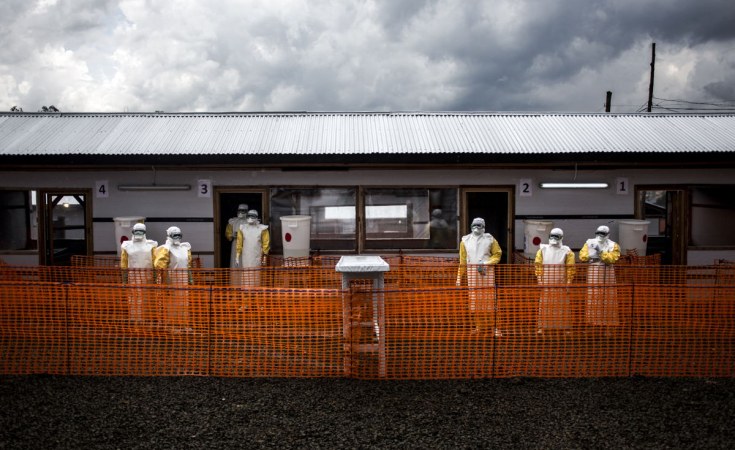 With health system at breaking point, uncertainty over how virus is being transmitted prompts fears it could range beyond DRC

The number of Ebola cases recorded each day in the Democratic Republic of the Congo is expected to more than double, with concern mounting that uncertainty over how the virus is being transmitted could result in it spreading to neighbouring countries.

On Thursday, the World Health Organization (WHO) reiterated its warning that there is a very high risk of the outbreak spreading not only across DRC but also to Uganda, Rwanda and even South Sudan. The heightened danger of transmission is due to extensive travel between the affected areas.

Efforts to contain the DRC outbreak were hampered after violence related to December’s elections halted prevention work. About 30 health facilities were targeted by protesters in Beni, while efforts to trace anyone who has had contact with the virus were partially suspended due to security concerns.

From October to December, six cases were recorded daily across all affected areas in the east, but numbers are increasing, said Jean-Philippe Marcoux, Mercy Corps’ country director for DRC.

“Now it’s doubling – it’s very possible that it can double again,” said Marcoux. “If we don’t significantly increase the resources, it will keep increasing. It will spread progressively to other health areas and it will be there for a long time.”

Two health centres supported by Mercy Corps are being rebuilt after they were burned to the ground by protesters over the Christmas period. Protesters were angry at a decision to postpone the presidential election in some areas of the country.

Though most of Mercy Corps’ work resumed in January, activities are still hampered by instability, the presence of armed groups and shortages of trained health professionals. Alongside the Ebola crisis, DRC is also experiencing outbreaks of cholera, polio and malaria, according to the WHO, piling more pressure on the country’s overstretched health system.

In some areas, approximately half of recent cases recorded were nosocomial – meaning that transmission occurred in health centres – said Marcoux.

“That is an indication that much more needs to be done at the level of health centres to prevent infection from spreading,” he said.

Marcoux added that greater funding is required for training and monitoring of health workers, and to do preventative community outreach work in areas where it is feared the disease could spread.

There are also concerns that, in some areas, the source of transmission is unclear in up to half of recent cases.
Advertisement

As such cases increase, there is a growing risk of unsafe burial practices among communities that have not received specialist support from contact-tracing teams.
Safe birth of baby born to Ebola survivor hailed as a medical miracle
Read more

Since the outbreak began in August, the WHO has recorded 668 confirmed or probable cases and 410 deaths. Since 1 December, more than a third of cases have occurred in children under 15. Of these, 16 cases were in babies under 12 months.

“If no more is done this will spread to other areas within DRC, and spread to neighbouring countries that are close to affected areas – Uganda, Rwanda, even South Sudan,” said Marcoux.

It is expected the disease will be present for at least another nine to 12 months, he added.

In a situation report, the WHO warned the outbreak was at a critical stage: “The persistence of insecurity threatens to reverse recent progress achieved around disease hotspots such as Beni and Butembo.”

Survivors Lend a Hand in DR Congo Ebola Fight
Tagged:
Copyright © 2019 Guardian Global Development Network. All rights reserved. Distributed by AllAfrica Global Media (allAfrica.com). To contact the copyright holder directly for corrections — or for permission to republish or make other authorized use of this material, click here.