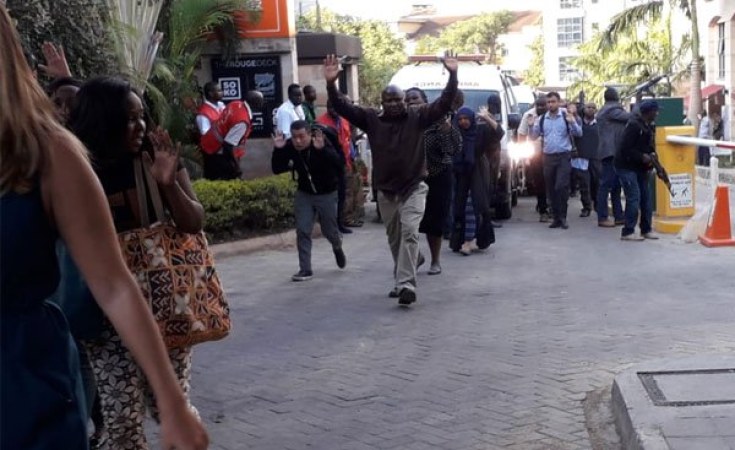 A story is told of one Tom Otieno, 18, from Kisumu County, born and raised in a Catholic family only to end up as a terrorist.

Otieno did not fit the typical description of a would-be terrorist in Kenya, often viewed as a young poor Muslim, most likely of the Somali origin.

Only that Otieno, like many others of his kind, grew up in Nairobi's Majengo slums, fingered by security agencies as a hotbed of radicalisation.

Apart from the District Officer's office, the most conspicuous building in this crime infested neighbourhood is the four-storey Riyadha mosque, completed around 2014.

According to a UN report, the mosque served as a recruitment ground and fundraising channel for Al-Shabaab. Officials connected to the mosque deny any link to the militant group but there is no doubt that Majengo is one of the main recruitment grounds for young Kenyans into extremism.

The story goes that Otieno converted to Islam in August 2011, alongside his sister, not unusual in a neighbourhood predominantly inhabited by Muslim.

Otieno's brother, Markkas Odiko told Nation in a past interview that it did not take long before many local boys who had also converted to Islam started disappearing.

Otieno too disappeared, reportedly en route to Somalia to join Al-Shabaab, only to be arrested in Mombasa.

His is an all-too-familiar story of radicalisation and recruitment in major towns across the country. Only that the common denominator is Majengo slums, found in several key towns across the nation.

Take the case of Majengo slums in Mombasa. Four years ago, one could not mention terrorism in Kenya without accompanying it with Majengo in one sentence.

Majengo, located in Mvita sub county, Mombasa, is what defined terrorism going by the huge number of youths, who had been radicalised and others recruited to terror group Al-Shabaab in Somalia.

The sub county, the only one located in Mombasa Island, is defined by the sprawling Swahili houses.

The constituency, which rose from dingy structures into some middle-class pretensions, became the home of radicalisation between 2011 and 2013.

The controversial clerics were felled following their links with terror-related activities and their impact was demonstrated by the sheer number of youths that flocked their sermons at Musa Mosque, a haven for disenfranchised and unemployed locals who found favour with the radical preachers.

After the killings of their leaders -- Sheikh Rogo and Makaburi -- the youth took over the Musa Mosque and changed its name to Masjid Shuhadaa.

For quite some time, the youths had a field day, until police officers raided the mosque and arrested some of them.

It was after the crackdown that the terror ring was neutralised and moderate clerics repossessed the mosque.

Things are not any different in the sprawling Majengo neighbourhood in Nyeri Town, which has now become a focal point in the war against terrorism after the Tuesday attack on Dusit D2 Hotel in Nairobi.

Investigations into the 14 Riverside Drive terror attack point in the direction of Nyeri's Majengo slums, where one suspect known as Ali Salim Gichunge alias Farouk Idriss is said to have roots.

While details regarding his roots continue to unfold, more troubling details into the Nyeri link with terror have emerged with security bosses admitting that they are "not surprised" by the alleged connection.

"We are aware of the claims and we are doing something about it. But it would not be a surprise that the suspect came from Nyeri. Currently, we have four areas that are being monitored as hideouts for radicalised youths," Mr Shisia said.

The county security boss revealed that Nyeri, Naromoru, Karatina and Othaya towns have been under surveillance.

The startling revelations are being compounded by information from police sources that about seven suspected Al-Shabaab militants had returned from Somalia at the end of last year with the help of local sympathisers.

The sources privy to the investigations also claim that Farouk could have made contact with the suspected militants while in Nyeri.

However, it still remains unclear how the said militants managed to slip away, reportedly to Nairobi, even as detectives accused local religious and security leaders of covering up for them.

Nevertheless, this is not the first time Nyeri is being linked to the murderous terrorists and the Nation can exclusively reveal that the county has been marked as a key hideout and transit point for Al-Shabaab sleeper cells.

Last year, three suspected terrorists were arrested in Nyeri after police foiled two attempts of attack on a college in the town. Mr Shisia hinted that more attempts could have been intercepted quietly.

"There are many that are stopped before happening and we do not speak about them," Mr Shisia said.

Would You Pay For Gory Nairobi Hotel Attack Photos?
Tagged:
Copyright © 2019 Nairobi News. All rights reserved. Distributed by AllAfrica Global Media (allAfrica.com). To contact the copyright holder directly for corrections — or for permission to republish or make other authorized use of this material, click here.