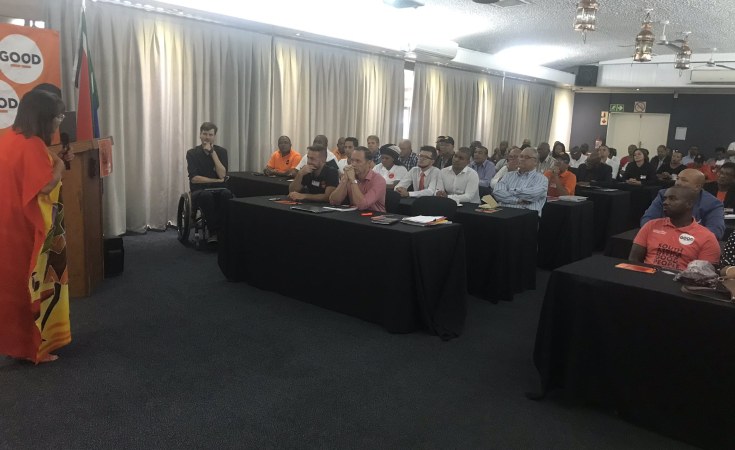 Patricia de Lille announced the leadership of her GOOD party on Sunday and shed some light on what policy directions her party will take.

Speaking at the Royal Cape Yacht Club after the party's policy conference at the venue of the Cape Town harbour over the weekend, De Lille said the National Leadership Committee (NLC) consists of 36 members and its task will be to act as the party's decision-making body until after the 2019 elections when they will convene a congress and elect the party's leadership.

"This NLC's most important task, and focus is to lead the movement to success in the elections," she said.

"These 36 members represent our country's greatest asset - our rich and beautiful diversity - and I am proud to lead this movement with these talented and committed South Africans."

She said the NLC is fully representative of all nine provinces with at least three delegates from each province.

The next task is to establish interim Provincial Co-ordinating Committees in each province. This will also set in motion a process throughout February to draw up party lists ahead of the election, expected to be in May.

The party has allocated specific leadership roles and functions to members of the Interim NLC, these are:

"These leaders are all GOOD South Africans who are eager to do GOOD for all our people," De Lille said.

Herron and August have been trusted lieutenants of De Lille ever since she was ID leader and during her tenure as mayor of Cape Town. Both left the DA with her last year.

De Lille said a policy document following from the weekend's policy conference, which was attended by about 100 delegates, will be published by the end of the month, which is also when they expect to share the party's manifesto.

"At the heart of this future vision is a South Africa that is spatially, socially, economically and environmentally just," De Lille said, adding that this was also the four themes of their policy discussions.

"The world and South Africa has changed significantly since 1994. Doing government as usual, through a system that apartheid put in place and governing parties have replicated, leaves our society to lagging behind the pace of our changing world," De Lille said.

"That is why GOOD is proposing to turn government on its head."

She said the party supports BBBEE, but not in its current guise where not enough people benefit.

Regarding corruption, she said: "All criminals should be put in jail, and not in Parliament. If we do that now, half of Parliament will be gone."

GOOD leader ?@PatriciaDeLille? on corruption: "All criminals must be put in jail, and not in Parliament. If we do that now, half of Parliament will be gone." ?@TeamNews24? pic.twitter.com/eo18uylnMm-- Jan Gerber (@gerbjan) January 20, 2019

She said GOOD supports parties declaring where they have obtained the funds and support the Party Funding Bill, which is awaiting President Cyril Ramaphosa's signature.

When asked to declare GOOD's funders, De Lille said she will do so when other parties declare theirs. She did however intimate that the party has been making use of crowdfunding.

She said the party will speak about racism everyday and endeavour to bring an end to "colour-coding" people.

"There's good in everyone," she said.

She said your colour is less than 1% of who you are.

"We are all human, we are all part of the human race."

She said she is not in favour of amending Section 25 of the Constitution to allow expropriation without compensation, as Section 25 already allows this. She said legislation must be enacted to make this possible.

As De Lille and her leadership team walked into the hall to address the media, GOOD people started singing: "On your marks! Get set! We are ready for GOOD movement!"

This is the same tune Ramaphosa-supporters sang around the time of his election as ANC president in December 2017.

As De Lille left, someone started singing: "My president!"