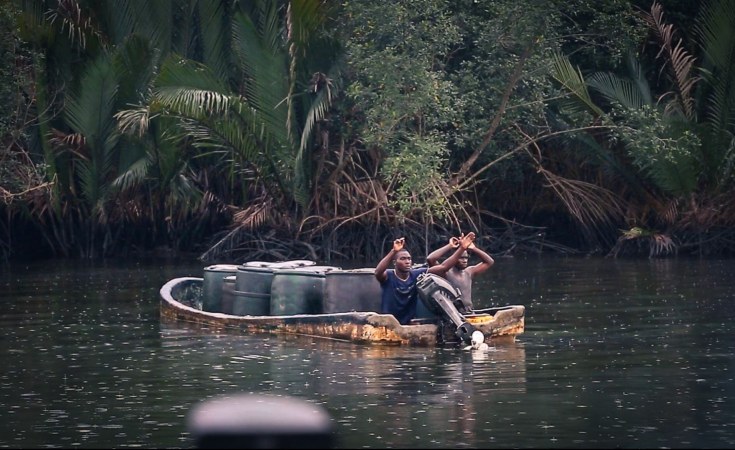 Oil thieves illegitimately refining crude oil at Otor-Edo and surrounding communities in Ughelli South Local Government Area, Delta State, and soldiers from the 222 Battalion, Agbarha-Otor, in the state are tangled in a roundabout war.

The illegal oil refiners have also destroyed aquatic life in the river, economic crops and a large expanse of land at Okpare community, following their intermittent firestorm with spilled crude to thwart efforts of soldiers at gaining access to their points of operation to secure enough time to escape.

NDV learned that fire snarl-up in the river is working for the oil thieves, as they have been able to fence-off soldiers with it and sustained their operations in the creek, even transporting diesel and other products in daylight.

However, military operatives have also launched an offensive against the vandals, setting ablaze, according to a source, a minimum of 50 vehicles found to be carrying stolen oil products at their checkpoint along Okpare Road.

When NDV visited the area last Friday, two vehicles suspected to be used by the oil thieves to convey illegally refined diesel, were being burnt by soldiers stationed in the area, sending huge balls of smoke into the atmosphere.

Speaking on the efforts to checkmate oil thieves in the area, a security source explained that operatives of the Operation Delta Safe, ODS, were in a dilemma over the activities of the vandals, who work with local informants.

A dependable source confirmed that the conflagration that has endangered aquatic life, land and economic trees were caused by oil thieves.

His words: "The fire that engulfed the area of late was ignited by vandals. They spill the products on the river and set fire to prevent the army from gaining access to their area of operation in a bid to give them ample time to escape."

"Recently, two of the oil thieves died at the Ugbogo area of Udu when their vehicle fell into a river while trying to convey their illegally refined diesel to another community for sale," he added.

"The flames which have been consistent for the past five months were attributed to the soot that accompanied the harmattan season in Ughelli and environs.

The effects are bald-faced in the section of Okpare River flowing beneath the popular Okpare Bridge, where not only aquatic lives in the river, but large expanse of farm land, including agricultural trees, have been affected.

On the other hand, some villagers accused community leaders of working in synergy with oil thieves in carrying out the illicit activities, while security operatives reportedly looked the opposite direction.

One of the residents, Efemena Akpojotu, said: "Let us stop deceiving ourselves over this matter. There is no way the boys operating these illegal refineries can carry out their operations without the support of some key persons in the communities in partnership with security operatives."