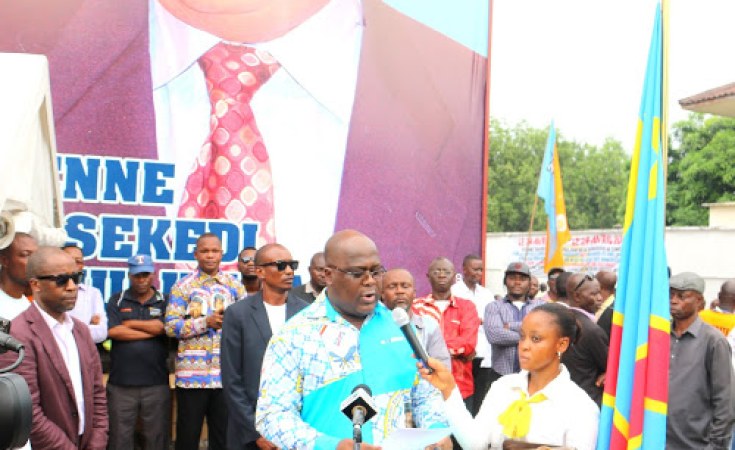 Leaders of the Southern African Development Community (SADC) have abandoned calls for a vote recount in the Democratic Republic of Congo's disputed presidential election, following an emergency meeting Thursday in Addis Ababa. Their U-turn underscores the delicate balancing act the 16-member bloc faces in finding a solution to DRC's crisis.

SADC, whose members include Angola and South Africa, must on the one hand ensure stability in the Democratic Republic of Congo, while at the same time respect the results of last month's ballot box.

"There are fears that if they push too hard to overturn the results [...] that they could risk generating unrest by stirring up contestation," explains Ben Shepherd, a Consulting Fellow at Chatham House in London.

The surprise victory of opposition candidate Felix Tshisekedi in the 30 December poll has been marred by claims of rigging by rival Martin Fayulu, who this week petitioned Congo's high court for a vote recount.

"The other risk is that if the results were to be reversed, we could go back to square one and [Joseph] Kabila ends up remaining president and that's not what most Congolese people want," Shepherd told RFI.

Regional leaders are under pressure to respond to the crisis with more clarity.

Last Sunday, the bloc called for a vote recount but South Africa and Zambia backtracked the following day, wary that a recount could heighten tensions.

At the same time, other members were pushing for a power-sharing government, citing the precedents of Kenya, Zimbabwe and South Africa.

"They were pulling in slightly different directions," comments Shepherd. "That was an early sign of the relative incoherence [...] but developing nature of the SADC position," - developing, because in recent years, many of the governments in the Southern African Development Community have seen a transfer of power, which has affected the region's dynamics.

"There are relatively new presidents in Angola, South Africa and Zimbabwe," continues Shepherd. "This new political arrangement hasn't really been tested. Zimbabwe obviously was the crisis, but [DRC] is a major crisis that SADC will need to respond to."

Southern African leaders have intervened in the DRC before, notably in 2013 to halt the insurgency of M23 rebels, who some critics accused Rwanda of supporting.

"Rwanda has a long history of involvement in the DRC in a fairly controversial position," says Shepherd.

The fact that Thursday's meeting was being held in Addis Ababa under the aegis of the African Union, led by Rwandan President Paul Kagame, means there are "lots of very complicated political dynamics cutting across each other that will go towards conditioning the response of SADC".

In a statement published on their website after the meeting, SADC leaders called on Congolese politicians to address any electoral grievances in line with the constitution, making no mention of their previous demands for a recount or a unity government.

They also asked the international community to respect the DRC's "sovereignty" and "territorial integrity."

Thursday's meeting took place against a backdrop of new evidence leaked to the press, that claims runner-up Martin Fayulu in fact won the presidential election.

Fayulu has denounced an "electoral coup," forged in backroom dealings between Tshisekedi and outgoing President Joseph Kabila. Tshisekedi's and Kabila's camps deny that.

"Every day there's something new, tomorrow it will be something else," Totu Mabiku, Felix Tshisekedi's spokesperson told RFI.

"Even during the vote count, the Catholic Church had already declared Martin Fayulu the president of the Republic. They are trying to obstruct the electoral process," he added.

Not everyone is convinced. "Frankly, there are serious doubts about the compliance of the results that have been proclaimed," Moussa Faki Mahamat, the chairperson of the African Union Commission told AFP.

"Even if the situation on the ground has been calm so far, it remains a cause for concern," he said.

So what should SADC do?

"I think SADC will be driven by the attitudes of the core state players: South Africa, the Angolans, the Zimbabweans," reckons Chatham House's Shepherd.

All three are key allies of the outgoing Kinshasa government.

"My feeling is that in the absence of major demonstrations of popular anger in DRC over the results announced [...] predictable caution will win out," says the Consulting Fellow, arguing that SADC leaders would prefer one opposition figure, however compromised, than none at all.

"The alternative of trying to reset the process and push for a democratic option brings with it a lot of risks," particularly for DRC's neighbours, reckons Shepherd.

"Should there be major problems, they could stand to see large movements of refugees to their borders," he concluded.

Kabila's Last Words As DR Congo President
Tagged:
Copyright © 2019 Radio France Internationale. All rights reserved. Distributed by AllAfrica Global Media (allAfrica.com). To contact the copyright holder directly for corrections — or for permission to republish or make other authorized use of this material, click here.