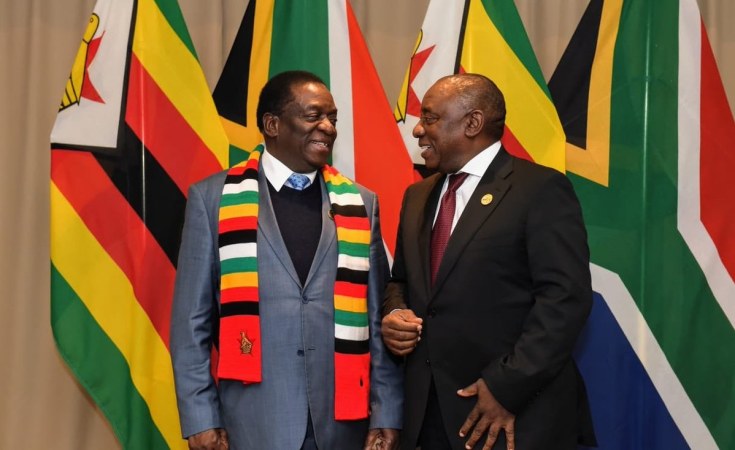 The security forces' violent crackdown on nationwide protests in Zimbabwe last week was met by deafening silence from the country's neighbours and the Southern African Development Community (SADC) regional block.

Following President Emmerson Mnangagwa's sudden announcement on January 12 of a 150% fuel price increase, the Zimbabwe Congress of Trade Unions labour movement called for a three-day national strike, which triggered the protests. Protesters burned a police station, barricaded roads with large rocks, and looted shops in Harare, Kadoma, and Bulawayo. Government security forces responded with live ammunition, rubber bullets, and teargas, which they fired at the protesters and into people's homes.

When South African President Cyril Ramaphosa finally spoke out about the situation in Zimbabwe on Tuesday, many expected him to censure Mnangagwa over the deaths of at least 12 protesters, the arbitrary arrests of hundreds of people, the two-day internet shutdown, and other abuses.Yet Ramaphosa did not address these concerns and instead called for the US government to remove sanctions on Zimbabwe and announced that he would soon be meeting with Mnangagwa.

While Zimbabwe is suffering from an economic crisis, gross mismanagement of public funds, the absence of the rule of law, corruption, rights violations, and macro-economic policy instability are more likely to blame than sanctions. With Zimbabwe asking South Africa for a bailout package of $1.2-billion, Ramaphosa has an opportunity to press for key reforms in Zimbabwe to address these concerns.

At the heart of Zimbabwe's economic problems is its $17-billion domestic and foreign debt. Zimbabwe has been unable to secure new loans from the International Monetary Fund (IMF) and the World Bank because Zimbabwe defaulted on existing loans from the IMF and World Bank.

The United States government imposed targeted bilateral sanctions since 2003 against 141 specific people and entities linked to the Zimbabwe government who have allegedly undermined democracy and human rights. They are not trade sanctions affecting ordinary Zimbabweans.

The US government made it clear that to remove its sanctions, Zimbabwe will need to clearly demonstrate that it is on an irreversible path toward true reforms and respect for human rights. Mnangagwa and other top government officials in Zimbabwe should move beyond a litany of promises and start carrying out the much-needed reforms that could take the country in a different direction.

Ramaphosa should ask Mnangagwa to ensure that Zimbabwe's security forces cease abuses, that soldiers return to their barracks, and all those responsible for killings and other abuses be held accountable. On January 22, on his Twitter account that, "the violence or misconduct by our security forces is unacceptable and a betrayal of the new Zimbabwe." But so far there has been little, if any, accountability for the continuing abuses, making his words ring hollow.

Drawing on former president Nelson Mandela's 1994 declaration that, "human rights will be the light that guides our foreign policy," Ramaphosa should urge the Zimbabwe authorities to take clear, decisive measures to honour the country's human rights obligations and ensure the protection and promotion of fundamental freedoms for the benefit of all Zimbabweans.

A firm stance on Zimbabwe will help to restore South Africa's human rights leadership on the continent. If South Africa moves forward with a bailout package for Zimbabwe, it should be conditioned on the Zimbabwe authorities taking clear steps to put in place measures to ensure transparency and accountability for public funds.

The violent crackdown on protesters severely undermines the government's efforts to reposition Zimbabwe as a rights-respecting nation. This is the message that Ramaphosa should frankly deliver to Mnangagwa, instead of a sanctions red herring.

Zimbabwe Help Must Not Be Free of Charge - Cosatu

No South Africa Bailout for Zimbabwe After Ramaphosa Visit
Tagged:
Copyright © 2019 Human Rights Watch. All rights reserved. Distributed by AllAfrica Global Media (allAfrica.com). To contact the copyright holder directly for corrections — or for permission to republish or make other authorized use of this material, click here.