Zimbabwe: Civil Servants to Strike On Friday Over Salaries 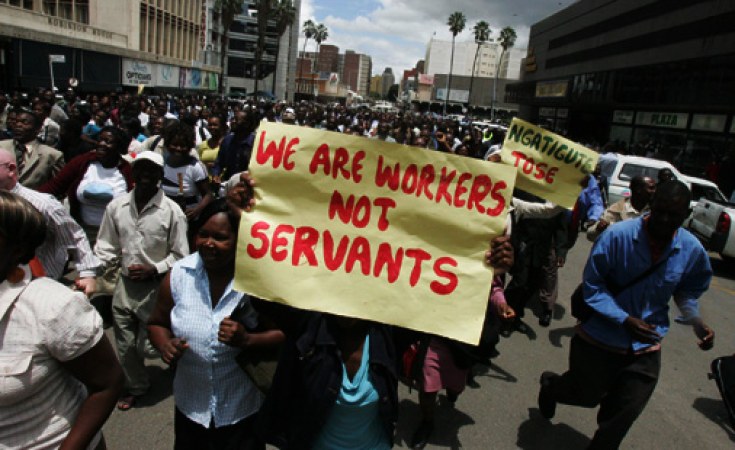 Zimbabwe faces a new wave of unrest as the group representing government workers announced on Wednesday that civil servants across the country will go on strike after salary negotiations failed.

David Dzatsunga, secretary of the Civil Service Apex Council, said the strike will begin on Friday as the country’s economic collapse deepens and frustration with President Emmerson Mnangagwa’s government grows.

The civil service umbrella body Apex Council said they gave their employer enough time to respond to their demands which include payment of salaries in US$ as well as better working conditions.

Addressing a press conference in Harare Dzatsunga tsaid the 14-day notice for an industrial action given to government on 8 January will expire in the next 48 hours adding the council will not be liable for anything that happens next.

“As Apex Council, having met government several times with no tangible results, we are advising government today that the notice we served expires in the next 48 hours,” he said.

“Having met today (Wednesday) to integrate the $300 million offer made by government presented to us in the Joint Negotiating Council (JNC) meeting under the 22.7 percent cushion from the employer, the Apex Council contains that problem of incapacitation is yet to be addressed.

The civil service workers rejected a $41 salary increment which was offered by government and, since then, talks have failed to yield positive results.

Government last week awarded civil servants a cushioning $300 million cost of living adjustment which the Apex accepted argued was not enough as it had shortfall.

“As the offer from government falls short of the $1,219 bond or RTGS for the lowest paid worker, on the expiry of the notice on Friday, Apex Council will not be liable for whatever happens there after.

“This is the position that has been taken by all unions of the council,” Dzatsunga warned.

He however said a final decision on the industrial action will be announced by Monday after consulting their members.

“It is not us who decide to go on strike. We will advise when we go industrial action. We cannot speak on members’ behalf.

“By Monday next week, we will have a clear position on what we are going to do,” he added.

A crackdown on last week’s protests over a sharp rise in fuel prices continued in the courts and on the streets, where witnesses and rights groups reported abuses by the military, police and ruling party youth gangs.

Mnangagwa’s call for national dialogue has been met with skepticism.