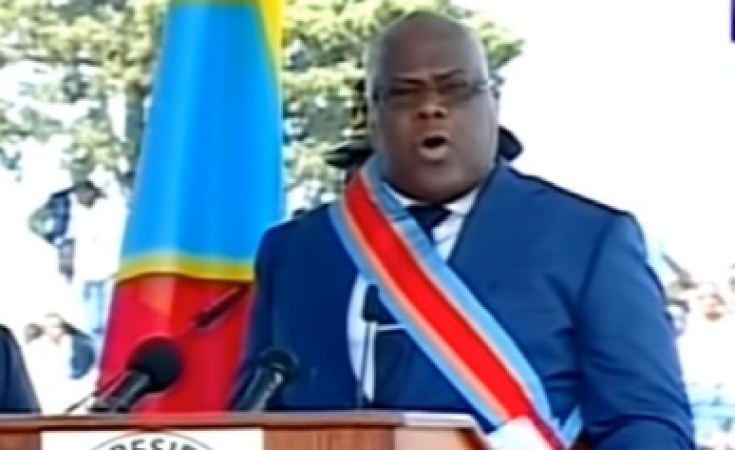 SABC Digital News/YouTube
Felix Tshisekedi speaks after being sworn in as president of the Democratic Republic of Congo.
Deutsche Welle (Bonn)
analysis

The wildcard opposition candidate has prevailed in last month's chaotic election. The son of a political legend, the relatively inexperienced leader has much to prove.

After weeks of uncertainty, opposition leader Felix Tshisekedi has been sworn in as president of the Democratic Republic of Congo (DRC).

He was inaugurated at the Peoples' Palace, the seat of the national legislature in the capital, Kinshasa. Supporters who for decades backed the elder Tshisekedi's pursuit of power streamed into the venue with Congolese flags tucked into their hair or wearing leopard-print caps and cravats.

At 55, Tshisekedi takes over from Joseph Kabila who is stepping aside after 18 years at the helm.

Few had predicted that Tshisekedi would emerge victorious from elections, which took place in December 2018 after being delayed several times.

Government-pick Emmanuel Ramazani Shadary represented continuity with the Kabila regime, while the other vocal opposition figure, Martin Fayulu, was chosen by by the major opposition candidates to run on a unity ticket. But after the Constitutional Court rejected a challenge of election fraud lodged by Fayulu, it is Tshisekedi who now leads sub-Saharan Africa's largest country.

The head of one of the DRC's oldest opposition parties, the Union for Democracy and Social Progress (UDPS), brings with him promises of change and a deep family legacy.

Tshisekedi, nicknamed 'Fatshi', was born into a well-off family in Kinshasa in 1963. His father was the late Congolese opposition politician Etienne Tshisekedi, a popular figure who served as prime minister for three brief terms in the 1990s.

From an early age, Tshisekedi was exposed to the realities of pursing a political career under an oppressive regime. After his father created the UDPS and openly spoke out against President Mobutu Sese Seko, Tshisekedi Jr. was forced to live under house arrest with his family in a small village in the central Kasai region, effectively bringing an end to his studies.

Finally, in 1985, Mobutu granted him permission to leave, paving the way for the younger Tshisekedi to settle in Brussels, where he made a living doing odd jobs and frequented the clubbing scene. But politics soon came calling once more and Tshisekedi became a fervent supporter of his father's opposition party. In 2008 he was named UDPS national secretary for external relations.

Like his father, he was highly critical of the Mobutu and Kabila regimes. He managed to secure a seat in parliament in the November 2011 elections, but did not take it up, citing electoral fraud. In May 2013 he refused a position as a rapporteur with the DRCs electoral commission, saying "I do not want to put my political career on hold."

A rebel within his own party

Tshisekedi's victory was considered unexpected largely because he does not enjoy full support even within his own party ranks. During a meeting held in Geneva in 2018 between DRC's opposition parties to decide on a unity candidate, Tshisekedi decided to run for president on his own ticket after Fayulu was chosen. Among his supporters was Vital Kamerhe, who had attempted to run for president in 2011.

"Etienne [Tshisekedi] was stubborn and proud, but Felix [Tshisekedi] is more diplomatic, conciliatory and attentive to others," a member of the Congolese opposition said shortly after Tshisekedi announced his candidacy. Support for his candidacy was boosted after he joined forces with the former president of opposition alliance "Le Rassemblement," Kamerhe said. The duo allegedly agreed that, if Tshisekedi won, Kamerhe would become prime minister.

Concern lingers over Tshisekedi's apparent lack of qualifications. Although he claims to hold a Belgian diploma in marketing and communication, his detractors frequently point out that he has no experience in high office, or even in a managerial position. There have been claims that he never received his diploma in the first place.

Stepping out from his father's shadow

Tshisekedi has promised to make tackling rampant poverty across the DRC his main priority. But also high on his list will be building a legacy separate from that of his father.

"When many people see Felix Tschisekedi, they see his father," Congolese journalist Wendy Bashi told DW. "So the big challenge is for Felix to get out of the shadow of his father."

Bashi thinks the president-elect will also be tasked with modernizing the UDPS party. "Most of the members of the UDPS are old today. There were in the fight together with Etienne Tschisekedi. So now there are young members of the party who are waiting for their time to shine and to come forward with something new."

Etienne Tshisekedi passed away in February 2017 at the age of 84, allowing his son to assume his position as leader of the UDPS. Supporters gathered outside Etienne Tshisekedi's residence on earlier this month cried tears of joy after it was announced his son had won the election, thereby achieving what his father failed to do.

One of Tshisekedi's first tasks will be to appoint a prime minister in a move which will see him sharing power with Kabila's supporters, who hold an overwhelming majority in parliament.

This article has been updated to reflect Tshisekedi's swearing in as president on Thursday, January 24, 2019.

Is DR Congo's New President On a Leash?
Tagged:
Copyright © 2019 Deutsche Welle. All rights reserved. Distributed by AllAfrica Global Media (allAfrica.com). To contact the copyright holder directly for corrections — or for permission to republish or make other authorized use of this material, click here.