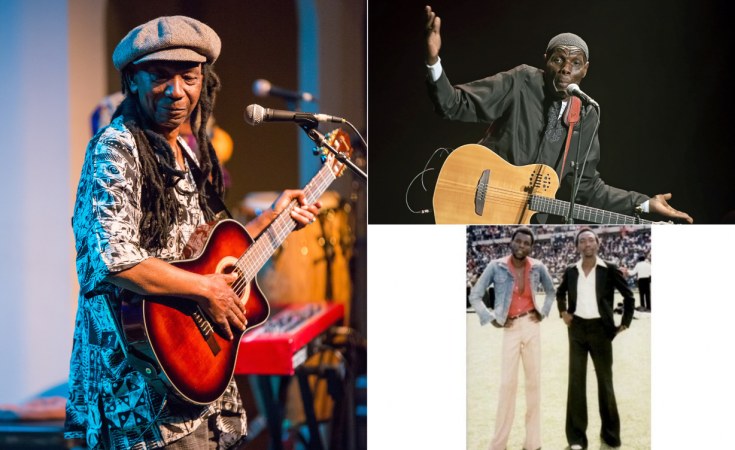 Fellow Zimbabweans, please join us mourn the departure of one of the best musicians we ever had in Zimbabwe. This was a man of many talents. Music that lasts is not easy to compose.

Oliver Mtukudzi was one of us. We started way back in the sixties in Harare and charted the same path for the same cause as we sang, entertained and educated from different platforms and at times from same platforms.

I will say that last year in 2018 when we joined hands on stage at the Glamis Arena, little did we realise that we were doing our parting shots. Kwaive kuonekana.

It was a night well spent with our fans as we sang and danced to celebrate a surprise twist of events in Zimbabwe. The rest of the history would unfold as we kept in touch and made efforts to strengthen our music and give hope to the people of Zimbabwe.

Today is a sad day. Tuku was a wonderful, kind hearted, selfless man who had the mind to care for others. I cry for a brother, friend, uncle, grandpa and sahwira. Oliver was a man of the people.

He sang from the heart and he was candid as he expressed himself clearly. His fame rested on solid pride in his culture, his Ubuntu and his focus on what mattered most to his life. People.

He found so much value in the people and spent so much time investing in various projects to make people stay focused and be together. At times he added his dance styles and sharp sense of humour to spice up his music.

Many enjoyed his music which could be deemed classy and timeless. He sang for all times, generations and occasions and everyone was left with something to chew upon. That was Oliver for you.

Even as the son of the soil toiled by taking his music across the world from South Africa with Steve Dyer and many other musicians he collaborated with, to America and Europe, he never got too busy for his cultural values or his people.

He had a big heart for his country. He sang well and stood for what he believed in. With lots of controversy surrounding some of his lyrics, he let people get the benefit of the doubt as he kept trudging on.

Today Samanyanga joins Sam Mtukudzi his dear son who left a few years ago. Mukorekore left a great katekwe footprint and big shoes that many budding musicians will find tough to fill.

Not so many of our budding musicians will be able to cope with cultural balances and dynamics faced today. He just did that.

He sang not to chase money but to create value in his convictions. Of course money followed his values and he created a steady life that many looked up to.

With his Pakare Paye Arts Centre, he built himself that legacy and sign post of Tuku music that will forever make his name memorable before many artists and fans.

Is Zimbabwe Erecting a Statue in Memory of Music Icon Tuku?
Tagged:
Copyright © 2019 Zimbabwe Independent. All rights reserved. Distributed by AllAfrica Global Media (allAfrica.com). To contact the copyright holder directly for corrections — or for permission to republish or make other authorized use of this material, click here.