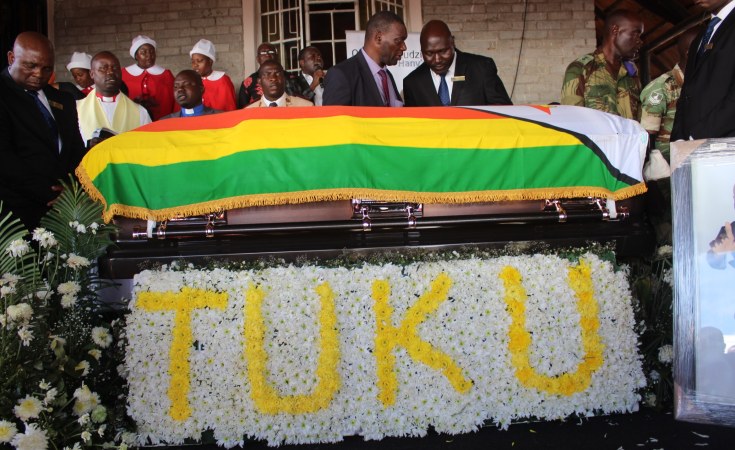 It was the late Dr Vimbai Gukwe Chivaura, who defined poetry, once upon a lecture, as the overflow of emotion captured in moments of tranquillity. I was still a young undergrad with milk on the nose when Dr Chivaura gave this definition.

I had never, in my wildest dreams, imagined myself becoming a poet of sorts. Now I write songs. I write poems. I write stories. Unfortunately, I still keep what I write to myself, and give my social media friends a few bits to nibble here and there. Moments of tranquillity are hard to come by, so I write a few verses and paragraphs every time they make a surprise entrance.

I knew Oliver "Tuku" Mtukudzi when I was still a little snot-faced boy in the village back in the 1990s. We did not have a radio or TV at home, but my grandmother, VaChikara, had a radio, and my uncle, Sekuru Dambu, had a black and white television set. So every Saturday I would go to my grandmother's place to listen to the famous Top 20, while sitting under the shade of the roof of her kitchen hut.

The first Tuku song that graced my ears left a lingering presence in my ears. I still remember vanquishing the air around Chiriga mountains with my own imitation of Tuku, while herding cattle: "Chido chenyu here icho, pindurai mambo!"

The power of poetry is in its unity effect, which gives it a prolonged presence in the mind of the reader or listener. That is how I can describe the effect of Tuku's song on me, back in the 90s, before the politics of adolescence had even begun to rule my life. For a song to appeal to the emotions of a young boy like that, it has to go beyond just making the feet move; it must move the heart.

Later I migrated to the city and enjoyed the opportunity of watching TV everyday. Tuku was a constant presence on TV. I remember watching his delivery on the internationally acclaimed film, "Neria". Having grown up with my uncles in the village, I identified closely with Tuku's role of brother to Neria. He interpreted the role of uncle very well in a way that brought the film to life.

The next time I bumped into Tuku was at Belgravia shops a few years back. I couldn't believe my eyes when I saw him. That was when I realised how humble he was. He was sitting in his car, just like anybody else, and did not seem to be concerned with bringing attention to himself. I waved at him and he waved back with a smile. Just like that.

The last time I bumped into him was at the 2018 NAMA awards. He came and sat next to where I was sitting with my wife. He had a pouch slung on his shoulder. It is this image of Tuku that I have in my mind now that I will always keep in my permanent memory of him.

A certain poet once said, grief can taste like sugar if you move your tongue along the right edges. I want to remember the things that make me smile, and this image, this image of Tuku sitting next to us with his pouch slung on his shoulder, is an image that makes me smile. So I will keep it as a souvenir. Iyi ndiyo nhaka yangu.

Towards the end of last year while travelling from Kwekwe with Memory Chirere, David Mungoshi and Ignatius Mabasa, we, on impulse, decided to stop briefly at Pakare Paye. These three guys (Memory, David and Ignatius) are poets. We bought our drinks and decided to sit outside. I could see that my three friends were communing with the Tuku ambience that hovers above Pakare Paye.

Pakare Paye is an architectural expression of a legend's passion for his people, for his culture, for the music that gives his country a distinct identity in the world.

Tuku practically carried Zimbabwe on his back wherever he went. His music was the poetry of a whole nation. His songs were a bundle that carried a nation's art and culture to the world. And every time he opened that bundle, the world could not help, but fall in love with him, and with where he came from.

Tuku is a hero. He is a shared hero. A transnational hero. By paying homage (in his poetic music) to the country that produced him, he enriched the world. He will live on. The indelible mark he left on the cultural landscape of the world is hard to ignore. Because of that, I am proud. I am proud to have lived in the era of Tuku, to have waved at the man, to have shared the same space with him.

As I go back to my poetry, I am aware of the insurmountable standard this great poet has set.