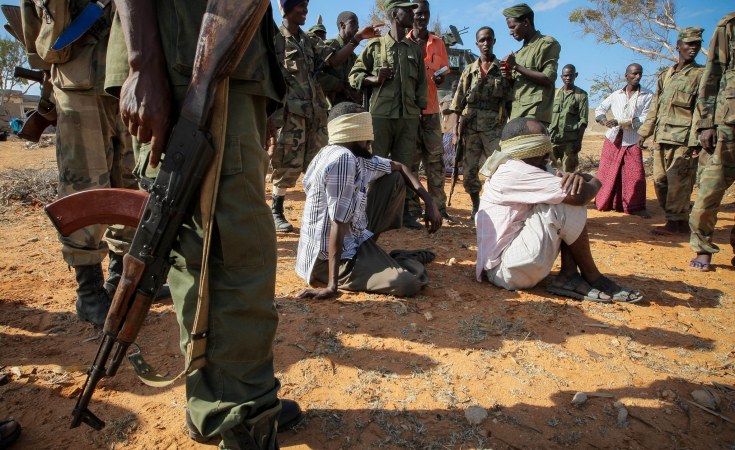 When Mr Hassan Abdi Nur, a mobile money agent, was arraigned for the 14 Riverside Drive attack, it must have come as a shock to people in similar businesses that the nature and size of transactions could put them in danger.

Investigators are yet to link the transactions to the terrorist attack that killed 21 people.

Mr Nur attracted the attention of police when he withdrew Sh5.2 million in 13 tranches from a bank in one day.

There is no limit to the amount a mobile money agent can transact in a day.

According to court papers, the agent who is based in Eastleigh, Nairobi, received Sh9 million from South Africa through 52 M-Pesa accounts he registered between October and December 2018.

Detectives also want to know why only two handsets were used in the transactions.

Mr Nur is among seven people arrested on suspicion of funding terrorism.

The Anti-Terrorism Police Unit wants them detained for 30 days. A magistrate court will today rule on how long they will remain in custody.

Even as police question the suspects, the case points to the bigger question of funding for terrorism.

Last year, the National Counter-Terrorism Centre said those funding such activities were devising new ways of remitting money after the regulation of Hawalas and the fight against piracy and illicit charcoal trade in Somalia gained momentum.

Mobile money is seen as one of the new ways of funding terrorists.

Locally, the group thrives on taxation and the illegal sale of charcoal. Globally, it is funded by other terrorist groups, states, the Somali diaspora, charities, kidnapping and the extortion of local businesses and farmers.

The Organised Crime and Corruption Reporting Project estimates that the group, which is responsible for most terrorist attacks in Kenya, earns about Sh700 million from smuggling charcoal to the Middle East every year.

"Charcoal is a financial lifeline for Al-Shabaab as it fights the UN-backed government in Somalia," OCCPR says.

Eritrea, Iran, Saudi Arabia, Syria, Qatar, Yemen and other governments have been accused of financing terrorism though none admits it.

The accusation has caused rifts between Gulf countries, resulting in sanctions and blockades.

Sources from the National Counter-Terrorism Centre say the amount of cash that flows into Kenya through the international money transfer system diminished when a crackdown was launched three years ago.

"Al-Shabaab agents and their financiers are inventing other ways of bringing money into the country, including sneaking in huge sums and the use of numerous bank accounts," the source said.

In a report showing the flow of finances to terrorist organisations in East Africa, the US Bureau for International Narcotics and Law Enforcement Affairs pointed out the lack of a financial intelligence unit in Kenya as a contributor to the frequent attacks.

Another disturbing revelation is by the United Nations Security Council.

In a report made public two months ago, the council said the organisation generates more than enough revenue to sustain its activities.

"Al-Shabaab continues to function as a shadow government in areas it no longer directly controls, employing a centralised taxation system applied consistently across southern and central Somalia," the report said.

"At one checkpoint in Bay region, it is estimated that Al-Shabaab generates approximately $10 million (Sh1 billion) per year by taxing transiting vehicles and goods."

The Monitoring Group on Somalia and Eritrea said Al-Shabaab's financial operations, including the collecting of revenue and payment of its members, are facilitated by the services provided by poorly regulated domestic telecommunications and financial entities.

"Al-Shabaab's financial system is systematic and centralised, with revenue directed from regional departments to the financial hub in Qunyo Barrow, Jilib district of Middle Juba region," the monitor said in a November 9 report.

"The group derives its revenue from a variety of domestic sources, primarily taxation on transiting vehicles and goods, business and agriculture and forced zakat (alms). The funds are then at the disposal of the head of the Shabaab Department of Finance (Maktabka Maaliyada), Hassan Afgooye, and its governing council (Shura) to distribute to departments."

It also said that the group employs mafia-style tactics to levy taxes via a network of hinterland checkpoints, with the collection enforced through violence and intimidation.

"Shabaab's domestic revenue generation apparatus is more diversified and systematic than that of the federal government," it said.

Revealed - How Al-Shabaab Are Circulating Millions of Terror Money Unnoticed

Police Trace Nairobi Hotel Attack Suspects to Dadaab Camp
Tagged:
Copyright © 2019 The Nation. All rights reserved. Distributed by AllAfrica Global Media (allAfrica.com). To contact the copyright holder directly for corrections — or for permission to republish or make other authorized use of this material, click here.