Zimbabwe: Lawyers March Against 'Threat to Rule of Law by Military' 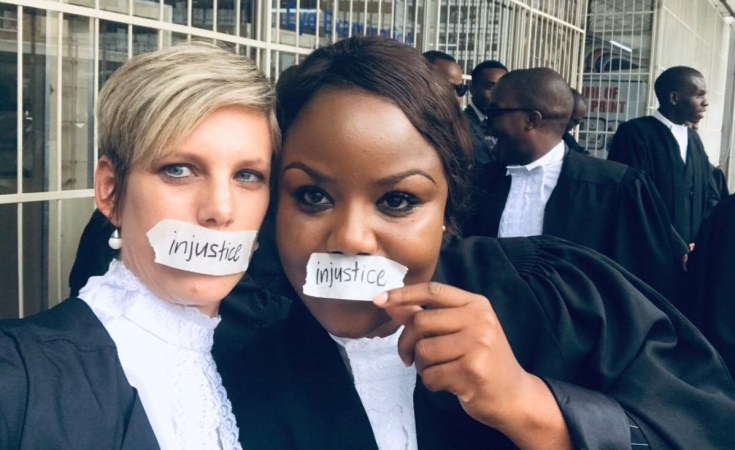 Fadzai Mahere/Twitter
Zimbabwe lawyers have taken to the streets to protest against the alleged abuse of rule of law by the State.
allAfrica.com
By Jerry Chifamba

Cape Town — Zimbabwe lawyers have taken to the streets to protest against the alleged abuse of rule of law by the State.

"So proud of my professional colleagues today. Restore the rule of law and constitutional democracy. The army must go back to the barracks," prominent lawyer and opposition politician Fadzayi Mahere tweeted.

Zimbabwe's Human Rights Commission (ZHRC) has accused security forces of systematic torture, raising fears that the country is reverting to the authoritarianism that characterised the rule of President Emmerson Mnangagwa's predecessor, Robert Mugabe.

Child Rights International Network says minors have been persecuted. In Zimbabwe "Children as young as 11-years-old have been detained on frivolous charges" related to recent protests, flaunting the government's lack of respect for their right to freedom of assembly, they said in a statement.

Lawyers and activists say police and soldiers have killed at least a dozen people, wounded scores and arrested hundreds since protests began following a hike in fuel prices. Police say three people died during the protests.

Lawyers and activists say hundreds of Zimbabweans are in custody accused of public order offences, including at least four lawmakers from the opposition MDC party, and Evan Mawarire, a pastor who rose to prominence as a critic of former leader Robert Mugabe and led a national shutdown in 2016.

"I am proud to have this astonishingly brave and competent human rights lawyer Beatrice Mtetwa as my friend. Here she is preparing to march with other lawyers in Harare today to protest the subversion of due process by the Judiciary in #Zimbabwe. Be safe," tweeted opposition politician David Coltart.

Before winning a contested election in July, Mnangagwa promised a clean break with the 37-year rule of Mugabe, who used the security forces to quell civilian protests.

Chief Justice Dismisses Claims That Judiciary Has Been Captured

Opposition Leader Chamisa Snubs Mnangagwa Dialogue Call
Tagged:
Copyright © 2019 allAfrica.com. All rights reserved. Distributed by AllAfrica Global Media (allAfrica.com). To contact the copyright holder directly for corrections — or for permission to republish or make other authorized use of this material, click here.