Zimbabwe: Statue for Oliver Mtukudzi - His 'Talking Guitar' Was Gift From Zimbabwe to the World 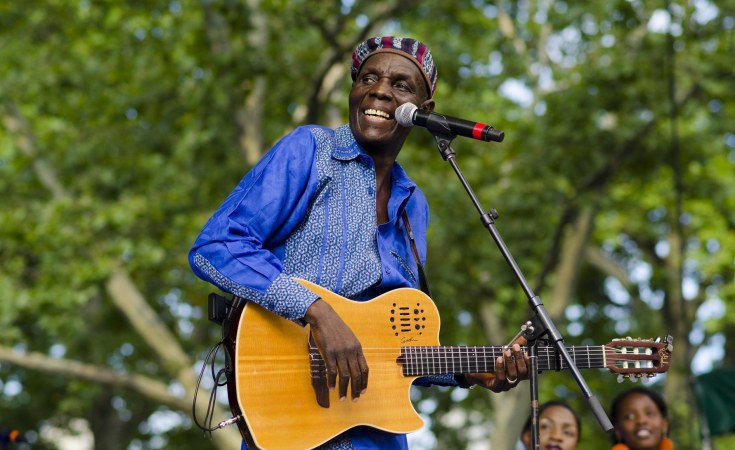 Government in Zimbabwe has confirmed that they will hold a big memorial show and also erect a statue in memorial of the fallen Zimbabwean music icon Oliver Mtukudzi who died at the age of 66.

Known to his fans as Tuku, he was a cultural icon for the southern African country. His aura and presence had a global resonance with fans around the world, yet the man remained humble and magnanimous.

Zimbabwe Minister of Youth, Sports, Arts and Recreation Kirsty Coventry said this on the sidelines of Mtukudzi's burial in his home town Madziwa on Sunday.

Coventry said she was inspired by the reaction and testimonies presented at the National Sports Stadium by several upcoming musicians on how they benefited from late Mtukudzi's advice.

She therefore announced government plans to construct a statue.

"I was inspired by the success of the concert held at the National Sports Stadium and how young artists spoke about the knowledge and advice they got from him (Mtukudzi). So my Ministry will hold a bigger concert and use that platform not only to remember Tuku's life but also give exposure to the upcoming artists," Coventry is quoted by the Mail & Telegraph.

Mtukudzi died in Harare after a long battle with diabetes, ironically enough on exactly the same day as his friend, the musician Hugh Masekela, who passed away on 23 January 2018.

He was also a businessperson, activist, philanthropist and a goodwill ambassador for Unicef in the southern African region. But it was his innovative music that made him deeply loved.

Dubbed "Tuku music", it was a blend of southern African music traditions, including mbira, mbaqanga, jit and the traditional drumming styles of the Korekore.

Tuku released his debut single in 1975. As a solo artist, Mtukudzi had his first successes shortly after Zimbabwe declared its independence in 1980.

Some of Mtukudzi's songs were sources of contention and deemed anti-establishment. For instance "Wasakara" (You are old) was interpreted by some as a reference to former President Robert Mugabe, given that a character in the song was in denial of age creeping up on them.

In the song "Kunze kwadoka" (the sun has set, it's dark), Mtukudzi presents the questioning parent and the precarious situation of a child who has stayed out on a date for a long time. Giving advice to the boyfriend, "perekedza mwanasikana, perekedza bhebhi iro zuva ravira kunze kwadoka" translated "accompany the girl, accompany that babe the sun has set, it's dark out".

Now the sun has set on Oliver Mtukudzi. He leaves the world his greatest prized possession, the gift of song.--Additional reporting by Willie Chinyamurindi, Associate Professor, University of Fort Hare

Previous Story
Next Story
What They Said About Nzou Samanyanga

Check Out Jah Prayzah's Tribute To Late Music Icon Tuku
Tagged:
Copyright © 2019 Nyasa Times. All rights reserved. Distributed by AllAfrica Global Media (allAfrica.com). To contact the copyright holder directly for corrections — or for permission to republish or make other authorized use of this material, click here.