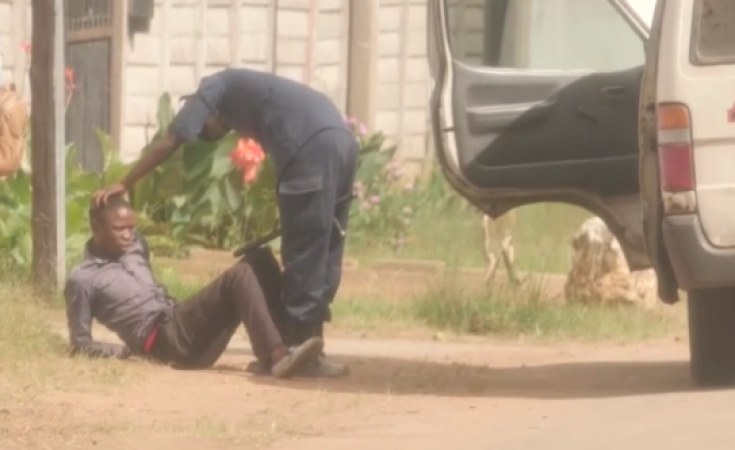 Photo: Sky News
A screenshot from a Sky News video of a man being beaten by security forces.
The Herald (Harare)
By Freeman Razemba

Prominent independent pro-women and anti-gender violence organisations, Msasa Project and Adult Rape Clinic say no reports have been made to them regarding the alleged systematic rape by security forces during the recent violent protests fronted by the opposition MDC-Alliance and its civil society partners.

Police have confirmed that only one case of alleged abuse was recorded at St Mary's, Chitungwiza, and investigations are currently underway on the matter.

Police has also invited victims to make reports through the Victim Friendly Units, which are secure.

Amid widespread reports by local and international media of State-sponsored violence against women, Msasa Project and Adult Rape Clinic said they were ready to assist all victims. Yesterday, Msasa Project director Mrs Natty Musanhu and an official from the Adult Rape Clinic Mrs Rudo Mashingaidze addressed a Press conference and confirmed that no one had come forward to them to either report or seek assistance after being sexually abused, saying they are only seeing these reports in both local and international media.

Addressing, police spokeperson Comm Charity Charamba said no one was above the law, be it bonda fide or bogus members of the security services, or civilians. She called on members of the public to report so that investigations will be conducted and the law take its course.

"These alleged reports, unfortunately have not been brought to the attention of police to allow investigations to be conducted and the law to take its course.

"Let it be known that no one is above the law, be it bona fide or bogus members of the security services, or civilians. Any abuse should be reported to the police with a view to arrest the perpetrator, gather evidence and initiate interventions for the victim to receive medical care," Comm Charamba. She added: "Without being discriminatory, we are alive to the fact that women and children suffer the brunt of any conflict the world over, hence our call for all those who might have been affected to come forth."

She said all cases reported to them will be handled in a professional manner which accords the victims full protection of the law and privacy. She said the ZRP Victim Friendly Unit was ready to investigate all such cases without fear or favour, to their logical conclusion.

"Some victims may be scared to report for one reason or the other, it might be fear of reprisals, stigma or mistrust, but we are saying if such heinous acts are allowed to go unresolved, they have lasting traumatic implications on the victims.

"The law is clear, for each and every offence, there should be redress or a penalty, hence our passionate appeal to members of the public to report," Comm Charamba said.

She emphasised: "In this regard, reports of abuse and rape can be reported at any police station or directly to national complaints desk which is open 24/ 7 on telephone numbers (0242) 703631," she said.

Comm Charamba said as security services they were guided by their constitutional mandate during the execution of any given task and at no time do they condone any unlawful conduct by the security forces which is obviously outside their mandate, responsibilities and duties.

She said any member who violates the Constitution will have themselves to blame as the law will be applied without reservation.

Meanwhile, the police have arrested a suspended police officer who was caught on camera beating up a handcuffed suspect along Chiremba Road last Saturday.

Constable Makumire was caught on camera assaulting the suspect while in civilian attire with a satchel strapped on his back. He was with two other security personnel.

The Zimbabwe Republic Police said in statement that they had widened their investigations to account for the remaining members of the security services captured in the video. The arrest is part of a wider operation by security forces to flush out rogue elements and ex-security officials bent on tarnishing their image and that of the country through committing brutal acts on civilians.

Comm Charamba confirmed Constable Makumire who was not on official duty was now assisting police with their investigation.

No Abuse Cases Reported Yet - Police

Dozens of Children Arrested During Zimbabwe Protests
Tagged:
Copyright © 2019 The Herald. All rights reserved. Distributed by AllAfrica Global Media (allAfrica.com). To contact the copyright holder directly for corrections — or for permission to republish or make other authorized use of this material, click here.