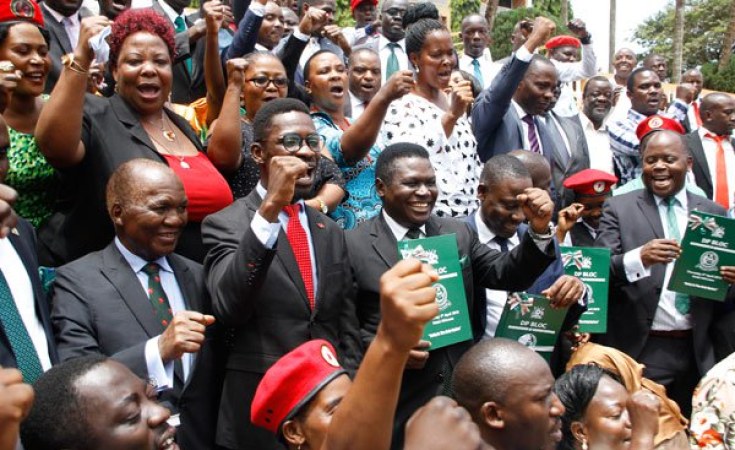 Abubaker Lubowa/ The Monitor
Opposition leaders after signing a Memorandum of Understanding to work together in preparation of the 2021 elections in Kampala (file photo).
The Independent (Kampala)

Kampala, Uganda — The opposition in parliament has revealed plans to table proposed amendments to different electoral laws amidst accusations that government is unwilling to do so.

It follows a statement, that they say is incomplete, by the Justice and Constitutional Affairs Minister, Kahinda Otafiire to parliament on the status of the proposed electoral reforms.

In his statement, Otafiire said a draft bill detailing the reforms recommended by the Supreme Court in the aftermath of the 2016 general elections is ready for submission to cabinet, but will be tabled later.

He said government could only proceed to introduce the electoral reform bills, in order to severally address matters relating to elections in Uganda, in a chronological manner, beginning with the review and amendment of the 1995 Constitution.

He asked for 6 months to put in place a Constitutional Review Commission.

The Shadow Attorney General Wilfred Niwagaba said that given the Minister's statement, it appears government is unwilling or not ready to table the electoral reforms under the guise of establishing a Constitutional Review Commission, which was promised in 2015.

He was seconded by the Arua Municipality MP; Kassiano Wadri, saying government would have already tabled the reforms if it was serious.

The Budadiri West MP, Nathan Nandala Mafabi alleged that the executive is on record for not wanting to table the electoral reforms despite different calls by the Speaker.

He agreed with Niwagaba's request for leave of parliament to table the proposed amendments. He appealed to Kadaga to give the shadow minister chance to present the amendments.

The Mukono Municipality MP, Betty Nambooze said during the ninth parliament, government promised to table the proposed reforms in this parliament and wondered why it didn't use the past years to prepare the proposals.

The Opposition Chief Whip, Ibrahim Ssemujju Nganda also questioned the continued delay by government to table the electoral reforms despite the timeline set by the Supreme Court.

The Kampala Central MP, Muhammad Nsereko emphasized the need to table the electoral reforms early enough so that Ugandans participate and organize appropriately for the general elections.

The Bukooli Central MP, Solomon Silwanyi and NRM Caucus Vice Chairperson agreed with the opposition and appealed to the Justice Minister to table the proposed reforms early enough.

The Leader of Opposition, Betty Aol Ochan assured the speaker that the Opposition is ready to proceed and asked her to allow them space to present their position.

Kadaga directed Otafiire to appear before Parliament in April and report about the electoral reforms.

Govt Approves Process to Amend Ugandan Constitution
Tagged:
Copyright © 2019 The Independent. All rights reserved. Distributed by AllAfrica Global Media (allAfrica.com). To contact the copyright holder directly for corrections — or for permission to republish or make other authorized use of this material, click here.