South Africa: Zuma 'Has Not Accepted Our Invitation' to SONA - Modise 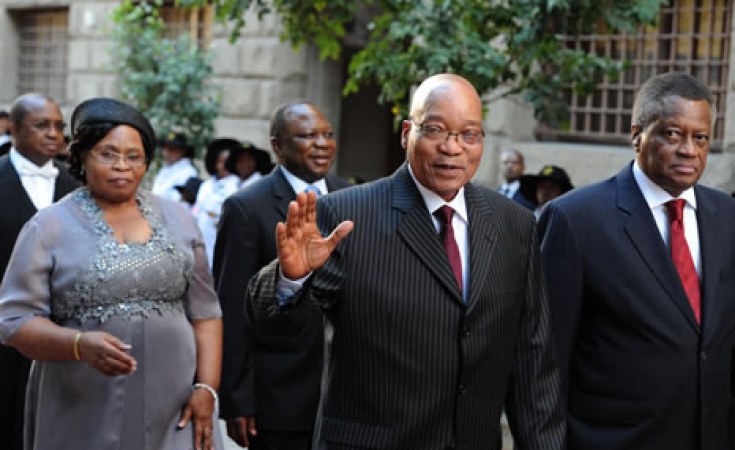 Parliament has made no special plans in case the EFF disrupts next week's State of the Nation Address, while former president Jacob Zuma has not accepted his invitation.

Parliament's presiding officers, speaker of the National Assembly Baleka Mbete and chairperson of the National Council of Provinces Thandi Modise, addressed the media on the preparations for next Thursday's event.

They also revealed that the budget for this year's event is 47% less than last year's budget, and that former president Jacob Zuma had been invited, but had not accepted the invitation.

Last week, as allegations of corruption with regards to Bosasa continued to grow by the day, EFF leader Julius Malema warned that "chaos could erupt again at this year's SONA" if President Cyril Ramaphosa didn't come clean about his dealings with the company.

Asked if they had received any communication from the EFF regarding questions for Ramaphosa on Thursday, Modise said: "No, we have not."

She added that they had not taken any "extraordinary measures" in case of a disruption.

"We are not expecting any disruptions," she said. "We will apply the rules, as we have done," she said.

She said the fact that an MP made a statement in election season, didn't mean that Parliament had to turn into a "war machine".

"We will rule using the rules, which are now known by heart by all MPs and South Africans," she said.

The SONAs of 2015 and 2017 descended into violence as EFF MPs were forcibly removed from the chamber.

In 2016, the EFF left voluntarily, chanting "Zupta must fall!", after being ordered out for disrupting proceedings.

Mbete said they were "delighted to confirm" that former heads of state and presiding officers had confirmed their attendance "to this auspicious occasion", and that these included former presidents Thabo Mbeki and Kgalema Motlanthe, and former speakers of the National Assembly Frene Ginwala and Max Sisulu.

Asked if Zuma had been invited, and if he would attend, Modise said he was automatically invited as a former head of state.

"He has not accepted our invitation," she said. "But we do not think there is anything untoward."

It was not immediately clear if Zuma would still accept at a later stage.

Mbete said, while South Africans continued to face "economic challenges", Parliament was taking every feasible step to do more with fewer available resources.

"Parliament has cut the budget for the SONA ceremony by 47% in comparison to the 2018 SONA budget," she said.

Last year R4.7m was budgeted, but the actual expenditure came down to R1.9m.

"For this SONA, we have budgeted R2.5m, and we are confident that, with further spending control measures put in place, the actual expenditure will be significantly lower."

The first SONA of the year - there will also be one after the 2019 general elections as is the custom - will also have the military parade, red-carpet procession, and a praise singer to welcome the president.

This year the praise singing will be in Setswana.

SONA - Pomp and Ceremony to Be the Order of the Day

What Ramaphosa Said During His State of the Nation Address
Tagged:
Copyright © 2019 News24Wire. All rights reserved. Distributed by AllAfrica Global Media (allAfrica.com). To contact the copyright holder directly for corrections — or for permission to republish or make other authorized use of this material, click here.