Zimbabwe: Tuku's Funeral Turned Carnival Send-Off - How It All Happened 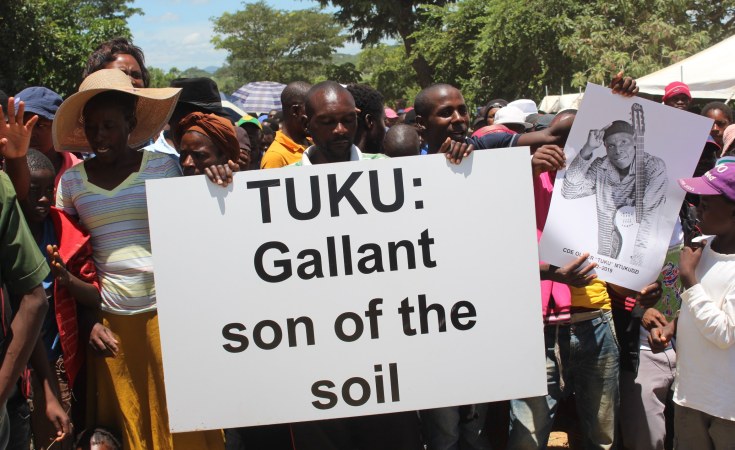 263Chat
Thousands travelled from across the country to bid farewell to Tuku.
New Zimbabwe (London)
By Nkosana Dlamini

A lot had printed images with a "Rest in Peace Samanyanga" message inscription pasted on rear screens.

Black dresses especially among female occupants were not in short supply.

As NewZimbabwe.com crew covering the solemn event, we had scant knowledge of the place we were heading for. And yet this was the easiest place to locate, thanks to the convoys.

Soon we were greeted by a landscape full of cars lining up both sides of the Bindura-Mount Darwin highway over a stretch of five to ten kilometres.

Some who could not secure roadside parking drove into groundnut and maize fields, which would later become their toilets. Some parked right into neighbouring homesteads.

As we slowly drove through the long corridor of parked vehicles, there was no mistaking the carnival atmosphere as many people sat on car boots, some inside, while beer bottles of every brew dominated car roof tops.

For sometime, there was a deafening cacophony of Tuku music and car hooting as excited funeral imbibers raised their beer bottles, screaming Tuku's name excitedly at passing motorists.

We were soon to find our own parking space, with half our vehicle inside a maize field. We began a 500 mitre walk to Tuku's homestead, where the ceremony was being conducted.

The atmosphere became tenser with every step taken towards the venue.

Soldiers bellowed threats at anyone found walking too close to the ZBC OB van broadcasting the event while parked along the highway. Every shrub around the area was manned by a uniformed soldier.

Police details tasked to manage crowds held hands, facing visitors to the venue and demanding to know the identities of all those who tried to enter the gate.

It was not too soon before MDC leader Nelson Chamisa and his erstwhile ally, Thokozani Khupe of the MDC-T splinter group, were caught in the body snarl up. There was no mistaking the rancour that still exists between the former allies turned enemies.

Crowds following Chamisa were soon to overwhelm the police barricade, allowing the popular opposition leader and his entourage to make their way in and mingle with mourners who braved a baking afternoon heat.

Mtukudzi's home comprises a modest piece of dwelling made of grey brick and thatched roofing.

His coffin, draped in a Zimbabwean flag, was reposed in front of a stage that had Ministers Oppah Muchinguri-Kashiri, her predecessor Sydney Sekeramayi, Sports Minister Kirsty Coventry, Senate President Mabel Chinomona and a few more. Coventry's husband was denied a seat on the stage.

It was difficult to follow the proceedings as crowds shuffled for a better view of the stage. There was no space to swing a mouse. Chamisa cast a conspicuous figure among the ordinary.

Muchinguri-Kashiri officiated on President Emmerson Mnangagwa's behalf. The speech was a repeat of the Tuku eulogy that dominated the media right from the day the first ever musician to be declared a national hero died on Wednesday.

The body was finally lifted from the front of the podium by army pall bearers for burial inside the homestead.

Assisted by his aides, Chamisa and his tiny entourage elbowed their way through where the near 41-year-old opposition leader had a chance to pour dirt as per rite inside Tuku's grave. He was seen exchanging a few remarks with Muchinguri, whom he also protected during the tense burial of his predecessor, Morgan Tsvangirai in Buhera 11 months ago.

Probably in attempts to avoid being caught up in dense traffic back to Harare, Chamisa was soon to leave. And there was pandemonium.

A decent section of some youthful mourners, suddenly deserted the venue and followed him as he strode to his waiting vehicle some 300 mitres away. His fanatics swelled in number with each step of the way he took to his car.

The situation was even too dangerous for the energetic opposition leader who quickened his walk and was soon whisked away, leaving his supporters chanting his name.

When the Chamisa spectacle was over, the mini parties continued both closer and some hundreds of metres away from the venue.

"When I wanted to use the bush toilet, I discovered that there were soldiers planted all over," remarked a colleague.

It was no sooner before a government chopper with Ministers returning to Harare roared overhead and quickly disappeared on the horizon.

Villagers, some of whom walked for about 20km to be part of the Tuku farewell event, spoke fondly about their neighbour who became one of the country's greatest citizens.

"For once, the whole country's attention is on our area. This is the first and perhaps the last time we will be able to receive such visitors."

Others reminisced over a humble boy who grew up in their eyes and later turned a philanthropist in his village.

"He assisted the community in a lot of ways. There were some loafers whom he assisted through forming a football team and developing a pitch," said one Gogo Mawire.

"We are happy that he was brought back to the village. We would not have got an opportunity to see him if he was buried in Harare."

Another villager said while she was disappointed by her crop which was trampled by vehicles, her sorrows were eased by that this was for Tuku's cause.

Zimbabwean Music Guru Tuku's Tribute Concert Lives Up to Billing
Tagged:
Copyright © 2019 New Zimbabwe. All rights reserved. Distributed by AllAfrica Global Media (allAfrica.com). To contact the copyright holder directly for corrections — or for permission to republish or make other authorized use of this material, click here.