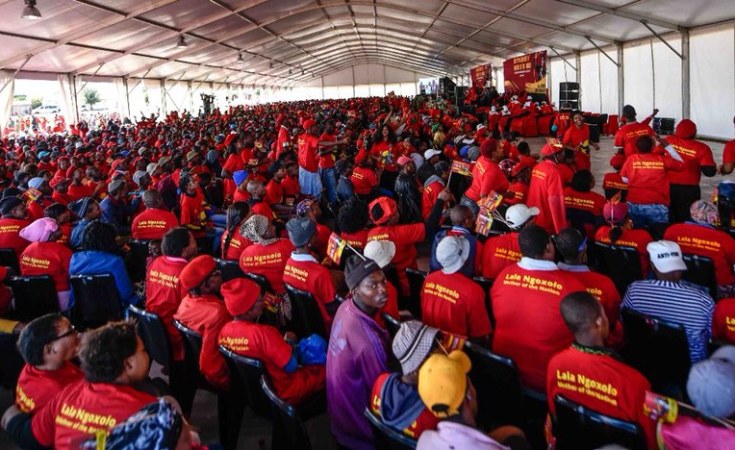 After a week of mobilising communities around Tshwane, the EFF and its leader Julius Malema will present their plans for South Africa, in an attempt to convince voters to back the red berets in this year's provincial & national elections.

The EFF's manifesto launch is set to take place on Saturday at the Giant Stadium in Soshanguve.

The red berets, much like the ANC, which launched its manifesto last month, held listening tours with different sectors of society in the build-up to deciding what should go into its manifesto.

The party, since its emergence just months ahead of the 2014 national elections, has cemented its role in the country's political landscape, having taken on numerous battles in Parliament, the courts and shaping public discourse.

These include having a hand in the fall of former president Jacob Zuma, changing the face of politics at institutions of higher learning, and assuming the role of kingmaker in assisting the DA to take control of three metros - Johannesburg, Tshwane and Nelson Mandela Bay (NMB) - after the 2016 municipal polls.

It also played a key role in "punishing" the DA and taking power from the DA and its NMB mayor Athol Trollip.

These are some of the areas the party is likely to focus on, though it will also have to build on some of the projects it has started during the 5 th administration.WATCH: Malema 100% behind coalitions, but only with parties backing EFF's land policy

The EFF has often been one of the leading voices when it comes to the land question. It was through this party that the motion to expropriate land without compensation was eventually passed in the National Assembly. The party also held discussions on this issue and whether South Africa should push to amend a clause in the Constitution to make this a possibility.

Malema will have to sell his party's take on land, which has been described by some as too radical. The EFF has proposed that all land should fall into the hands of the state, with those seeking to use it for productive means being granted leases to do so.

It's also expected that the party will continue with its call for people to occupy unoccupied land, a position which has resulted in Malema being charged under the Riotous Assemblies Act, a law from the apartheid era which is still on the statute books.

The EFF will also share its plans on how it plans to deal with unemployment, a dire plight compounded by South Africa's sluggish economy. Although the country is now officially out of a technical recession, 26.7% of its people are still without jobs.

President Cyril Ramaphosa has been on a mass drive to attract foreing investors to help stimulate the economy and to create jobs, but the EFF has argued that whatever plans are set out to address unemployment need to be clear, with time frames and deadlines.

#EFFGalaDinner Malema: We must declare special economic zones. We will do so tomorrow at the Manifesto Launch. Once we kill unemployment in those areas, we will have conquered the issue of scarcity of jobs.-- Economic Freedom Fighters (@EFFSouthAfrica) February 1, 2019

The EFF has managed to secure job security for numerous staffers who were previously offered "casual" or "contract" employment in municipalities where it's in partnership with the relevant governing party. This has resulted in workers in Tshwane, Johannesburg and Nelson Mandela Bay being insourced.

The EFF seems to also have a view that some jobs should be reserved solely for South Africans, this in a country where more and more foreign nationals are seeking employment opportunities due to political instability and difficult economic challenges in their home countries.

EFF leaders, who were favourites of those seeking someone to take on Zuma, have been losing favour in some pockets of society, with many not sure what to make of the party and its ongoing war with the media and some ANC politicians.

Recently the party has been embroiled in claims of being linked to the collapse of VBS Mutual Bank, where more than 50 individuals and companies have been accused of looting close to R2 billion from the bank. The report into the looting alleges the brother of the party's deputy president Floyd Shivambu received money from the bank's largest shareholder. Several news reports have claimed some of that money then flowed to Shivambu and the party.

Shivambu, his brother and the EFF strongly deny the allegations.

#EFFGalaDinner Malema: We want history to give a correct account. That when the media was embedded, someone exposed them. We need the media, to expose corruption. Even if there is corruption within the EFF, media must expose it.-- Economic Freedom Fighters (@EFFSouthAfrica) February 1, 2019

Although the party has denied all allegations of being linked to VBS, the narrative has caught on, with some in other political parties using the looting of VBS to discredit a number of EFF leaders.

The EFF has bandied about a number of promises over the past few weeks, including increasing social grants, with the elderly promised an increase from R1 700 to R3 400.

The party has also insisted that these are not just election promises, but commitments which people could use to hold it accountable, should it emerge victorious at the polls in May.

KEEP UPDATED on the latest news by subscribing to our FREE newsletter.

Previous Story
EFF Denounces Xenophobia Ahead of Polls
Next Story

EFF Denounces Xenophobia Ahead of Polls