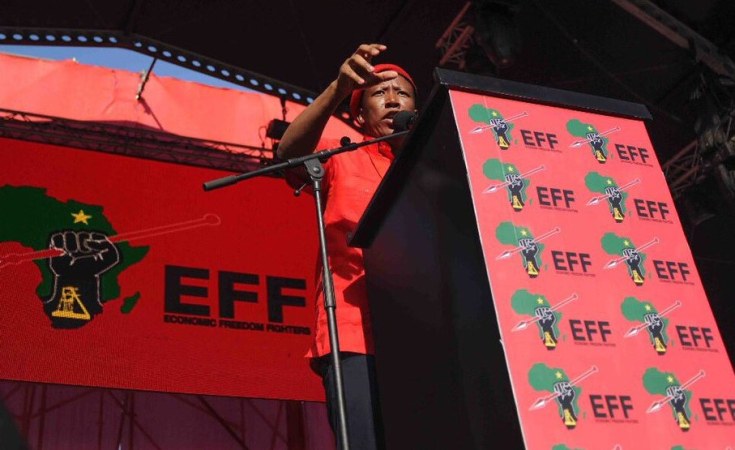 The Economic Freedom Fighters, should the party receive a mandate from South Africa's electorate, would push to have the Constitution amended - but not to expropriate land without compensation as the party is known to want, but rather to do away with provinces.

Its leader Julius Malema, speaking at the Giant Stadium in Soshanguve, where the EFF launched its 2019 national elections manifesto on Saturday, said the party no longer wanted provinces.

He put forward a view questioning the existence of nine separate provinces, an idea often toyed with by the ANC, which is the governing party.

Malema then told the crowd which had packed the 18 000-seater stadium that there would be no premier candidates from his party to contest the upcoming elections.

"This thing of provinces is the one that leads to tribalism; in Limpopo you already know it's the Pedi, [Xitsonga] and Venda; in KwaZulu-Natal, the Zulu; and in the Eastern Cape the Xhosa."

Speculation in and around the EFF had been that the party would pitch its provincial chairperson Mandisa Mashego to lead Gauteng, which is set to be one of the most fiercely contested provinces in the upcoming polls.

But Malema dismissed this notion.

"We don't believe in provinces we are not going to have premier candidates in the EFF," said Malema.

"There is only one head of the election campaign and that is the president of the EFF," he added.

"From national straight to local, from local straight to your tap, your schools... changing your lives practically," said Malema.

The EFF also called for the voting age to be lowered to 16, arguing that South African law gave a 16-year-old the right to consent when it came to engaging in sex.

"Sex is worse that voting," he said.

Malema said if young people could pick and choose who they wanted to sleep with they should be able to pick the political party they wanted in charge.

"If they do, you know who will win... cause we are not an old age home," said Malema.

ANC Looking for a Way Out On Land Issue - Malema

EFF Denounces Xenophobia Ahead of Polls