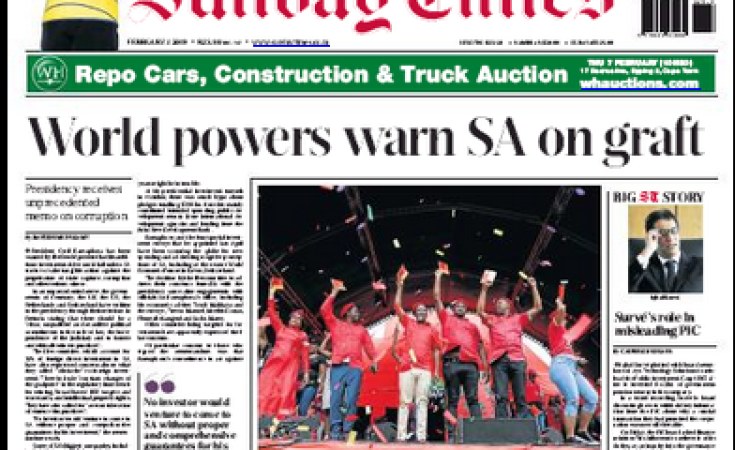 Five of the largest countries investing in South Africa informed Pretoria - in June 2018 - that President Cyril Ramaphosa's investment drive could suffer if it didn't apply government policies more consistently and enforce the rule of law more strictly. The memo, or discussion paper, was a basis for discussion with one of Ramaphosa's special investment envoys, former Standard Bank CEO Jaco Maree.

Ambassadors to South Africa from the US, Germany, UK, Switzerland and the Netherlands - representing about 75% of total foreign investment in this country - expressed their concerns in discussions with Ramaphosa's investment envoys and other officials in June 2018.

Diplomats insist these discussions were part of the preparations for Ramaphosa's big investment conference in October. The ambassadors were generally positive in their discussions about his plans to raise US100-billion of investment in five years.

So the ambassadors were surprised by the splashing of a story on the front page of the Sunday Times this weekend, eight months later, which said they had signed a letter to Ramaphosa warning him his investment drive would fail if he did not take tangible action against graft.

This has now sparked a diplomatic incident. International Relations and Co-operation Lindiwe Sisulu...

Previous Story
Ramaphosa's Relations With West Sour On Eve of State of Nation Address
Next Story
Statement on Memorandum by Embassies of the U.S., UK, the Netherlands, Germany and Switzerland

Statement on Memorandum by Embassies of the U.S., UK, the Netherlands, Germany and Switzerland

Bombshell Report Exposes Rot at South Africa's Eskom, Transnet
Tagged:
Copyright © 2019 Daily Maverick. All rights reserved. Distributed by AllAfrica Global Media (allAfrica.com). To contact the copyright holder directly for corrections — or for permission to republish or make other authorized use of this material, click here.