Nigeria: Will He Be Lucky This Time? 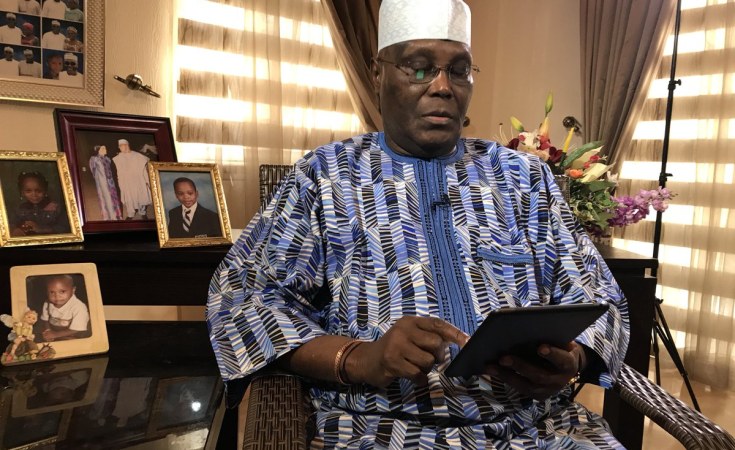 The presidential candidate of the Peoples Democratic Party (PDP), Alhaji Atiku Abubakar, was born on November 25, 1946. He served in the Nigeria Customs Service for 20 years rising to the rank of Deputy Director, the then second highest position.

He retired in April 1989 and went into full-time business and politics. In 1999, PDP's presidential candidate, Chief Olusegun Obasanjo chose him as running mate whilst Atiku was the governor-elect of Adamawa State. He went on to serve as Vice President of Nigeria from 1999 to 2007.

However, having bid unsuccessfully for the flag at two previous times, the February 16, 2019 seems to be his brightest chance to fulfil his lifelong political ambition.

Atiku has been trying to be president as far back as 1992 during the botched Third Republic. He contested the presidential primary of the Social Democratic Party (SDP) and came third in the primary behind late Chief Moshood Abiola.

On November 25, 2006, Atiku announced that he would run for president, and on December 20, 2006, he was chosen as the presidential candidate of the Action Congress (AC). The Independent National Electoral Commission (INEC) on March 14, 2007, released the final list of 24 aspirants for the April 21 presidential election. Atiku's name was missing from the ballot. The Supreme Court unanimously ruled on April 16 that INEC had no power to disqualify candidates. The ruling, therefore, allowed Atiku to contest the election. Official results revealed that Atiku came third with 2.8 million votes behind PDP candidate, Umaru Yar'Adua, and All Nigeria Peoples Party (ANPP) candidate, Gen. Muhammadu Buhari.

In January 2011, Atiku contested for the Presidential ticket of his party alongside President Goodluck Jonathan and Sarah Jibril, and lost the primary, garnering 805 votes to President Jonathan's 3,542.

In 2015, Atiku gave a shot at the Number One position by contesting the presidential primary of the All Progressives Congress (APC). The incumbent President, Muhammadu Buhari, polled 3,430 votes, Kwankwaso came second scoring 974 votes, while Atiku came third with 954 votes.

In pursuit of a policy of diversification, we shall support the development of a commercially-driven, technology-proficient agriculture which ensures food security and interfaces with manufacturing sector for the supply of raw materials. Agriculture will develop into a modern, productive and competitive venture with high job-creating and poverty reduction capacity. We would increase agricultural output from the current level of N23.85 trillion to about N40 trillion by 2025. This would imply an annual growth in agricultural sector from 4.11% to 10% between 2019 and 2025.

The major policy initiatives for improving productivity in the agricultural sector will include the following: Collaborate with the States in the design and implementation of robust and sustainable land reforms which will, among others, simplify and strengthen titling and land transfer processes with a view to encouraging commercial farming. Accordingly, we shall strengthen the Presidential Committee on Land Reform and ensure the re-launch of the Systematic Land Titling Registration Programme across the country.

Also, we will strengthen the markets for agricultural commodities through the establishment of private sector-led commodities exchanges around the major crop production regions of Nigeria.

Growth is slow and uninspiring: Nigeria is continuing its path of lacklustre performance even after exiting the 2017 recession occasioned by the precipitous fall in international commodity prices.

The response to our economic development challenges will not come automatically, but will have to be achieved by deliberate efforts to design and implement coherent and comprehensive strategy and policy. Our Economic Development Agenda seeks to create a sound, stable and globally competitive economy that is diversified with a mix of output from a 'technologically- enabled agriculture', a 'vibrant and globally competitive manufacturing sector' and a modern services sector. The economy will be supported by adequate and efficient economic infrastructure as well as investments in the New Economy. With regards to fiscal resources, we recognize the imperative to broaden Nigeria's resource horizon, maintain spending efficiency and reform internal revenue generating machinery. Economic growth is envisaged to be all inclusive, accompanied by increased employment and reduced poverty levels as well as a greatly enlarged and much more effective system of education, training and health.

Nigeria's supply of infrastructure remains grossly inadequate making businesses uncompetitive, narrowing economic and entrepreneurial opportunities and stunting enterprise growth. The country's core Infrastructure stock is estimated at between 35-40% of GDP, which is significantly below the International benchmark of 70%. Nigeria therefore needs to spend approximately USD35 billion annually to meet its requirements.

In view of this, our administration will undertake the following: Establish an "Infrastructure Development Unit" [IDU] in the Presidency, with a coordinating function and a specific mandate of the supply of efficient transportation infrastructure, including roads and rail transportation, improves the levels of productivity, enhances the competitiveness of enterprises and generally supports business creation and growth. The scaling up of transportation spending, through construction and operation of infrastructure projects, equally creates jobs and is, therefore, essential for driving domestic productivity and GDP.

Our reforms in the education sector shall focus on four pillars. (1) Streamlining of functions and transfer of responsibilities for greater efficiency: The current division of responsibility between the state and federal government and a multiplicity of institutions is chaotic and often unclear with overlapping functions. By 2024, responsibility for funding and control of public primary education shall be transferred to the local governments. Senior secondary and tertiary education, provided through universities, polytechnics, mono-technics, and colleges of education (CoEs) will be under the jurisdiction of state governments.

Under the proposed arrangements, the state governments will assume responsibility for all the federal unity schools, and Federal Ministry of Education-owned and funded universities, polytechnics, technical colleges, and the colleges of education located in their respective areas.

States will be encouraged to set up Regional Common Services Agencies for the joint running of those institutions transferred to them by the federal government under the new arrangement.

Our policy thrust will be all embracing and targeted towards a preventive care strategy by creating a clean environment, modernizing living conditions, carrying out enlightenment campaigns on healthy living, and supporting with curative care through the provision of state-of-the-art healthcare facilities in hospitals and in rural clinics. We shall also ensure universal access to basic maternal and child health, reproductive health, immunization and mental health as well as effective therapies for the control of Non-Communicable Diseases (NCD) like diabetes, heart diseases, lung diseases, renal dialysis, and cancer.

Our objective is to contain the current challenges of security in Nigeria through the deployment of good governance, visionary leadership and politics of inclusiveness that will reduce citizens' frustration and alienation and eliminate the compulsion to take up arms against the society or fellow countrymen. Our priority will be to restore the citizens' confidence in Nigeria as one indivisible, indissoluble, ethnically diverse but strong country to protect them and secure socio-economic benefits.

Ruling Party Says Atiku Abubakar Is Not Nigerian
Tagged:
Copyright © 2019 This Day. All rights reserved. Distributed by AllAfrica Global Media (allAfrica.com). To contact the copyright holder directly for corrections — or for permission to republish or make other authorized use of this material, click here.