The rape trial of controversial pastor Timothy Omotoso is expected to resume in the Eastern Cape High Court in Port Elizabeth on Monday.

The case was postponed in December 2018 pending the outcome of a Supreme Court of Appeal (SCA) decision on his application for Judge Mandela Makaula's recusal.

The SCA has since dismissed Omotoso's bid to have Makaula recused.

The SCA also rejected an application to have the charges against Omotoso quashed.

In October, Makaula twice rejected the defence's applications for leave to appeal a ruling dismissing their bid for his recusal. He said there were "no reasonable prospects of success" on appeal.

Defence advocate Peter Daubermann accused Makaula of "being biased" following the testimony of the first witness, Cheryl Zondi. He approached the SCA over the decision in November.

In the recusal application, Omotoso's defence team argued that Makaula was "too friendly" with Zondi and that it was believed that he would not be impartial.

Makaula said the grounds for his recusal were "dubious" and "ridiculous".

Omotoso and his co-accused, Lusanda Sulani and Zukiswa Sitho, are accused of 63 charges and 34 alternative charges, which include rape, sexual assault and racketeering.

Zondi reportedly received death threats in the weeks before her court appearance.

'You'll be killed by God'

The 22-year-old university student was apparently told that she would be killed by God because she had acted against a man of God, the Sunday Times reported.

Zondi's decision to testify in open court has captured the public's attention. She has been hailed for her bravery and holding her own against what many supporters found to be an "inhumane and unnecessary style of cross-examination" by Daubermann.

Forty-nine witnesses have been called to testify in the televangelist's trial.

Zondi earlier told the court that up to 30 girls were given nicknames and referred to as "wives" when they stayed in the rape-accused pastor's Umhlanga Rocks house in Durban.

Zondi told the court on Wednesday last week that, before she left the house for the last time in 2013, she had been kept in the room next to his main bedroom.

"The girls who lived there were given a nickname and we were called his 'wives'," Zondi, 22, said when she took the stand in the trial in the High Court.

She described the three accused as her molester, groomer and Port Elizabeth hostess.

Omotoso's church, Jesus Dominion International, said it would "continue to stand with and support the man of God".

"Rev Omotoso deserves a free and fair trial without any impartiality. As a church we want to believe this will be made possible regardless of his country of origin. God bless." 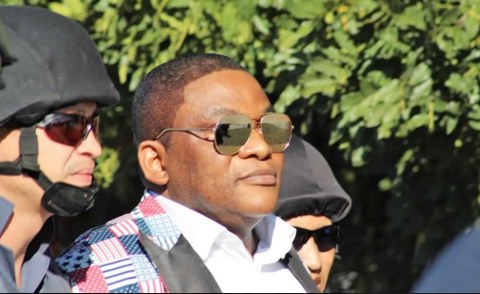