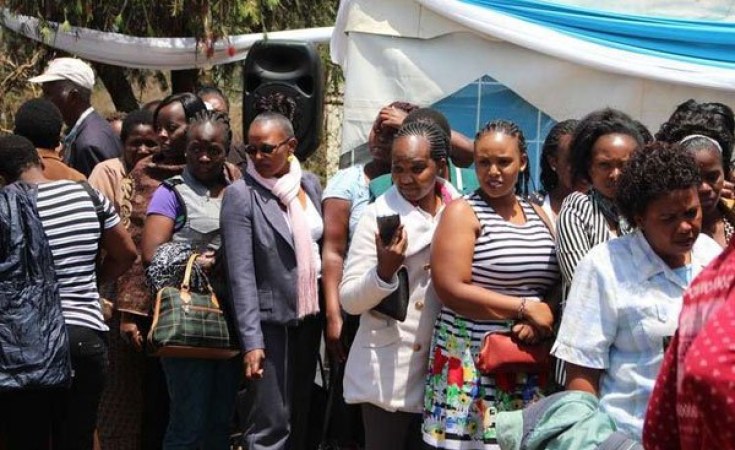 The Nation
Women queue to register to be tested for breast cancer at Kenyatta National Hospital (file photo).
The Nation (Nairobi)
By Collins Omulo

Kenya risks failure to fully implement the Sustainable Development Goals (SDGs) 2030 within the stipulated period because of laxity in implementing critical policies, especially those touching on gender equity, a new report reveals.

The recent report by African Women's Development and Communication Network (Femnet) in collaboration with Equal Measures 2030, a global independent civil society, faults the government on its slow implementation of gender equality goals.

The report titled 'Data Driving Change: Introducing the SDG Gender Index in Kenya' showed that the numerous progressive policy frameworks aimed at advancing gender equality and girls and women's empowerment have not translated into actual implementation.

The legislations - the Protection against Domestic Violence Act 2015, the Community Land Act 2016 and the Matrimonial Property Act 2013 - have not sped-up the government's commitment to achieving the SDGs.

According to the report, released Tuesday, lack of implementation of legal and policy instruments and girls and women's empowerment remains a chronic issue due to a lack of sufficient resources coupled with little progress on gender-responsive budgeting.

This ultimately hinders girls and women from reaping the intended benefits of the laws or achieving the objectives of the 2030 agenda on sustainable development (SDGs).

The report revealed that Kenya's development trajectory, against the backdrop of achieving the SDGs 2030, even though encouraging in some goals, still leaves a lot to be desired in terms of government's commitment to full implementation.

This is in line with glaring gaps noted on progress regarding gender equality and women's empowerment with the government and relevant stakeholders urged to hasten implementation of women and girls rights or risk failing on the important agenda.

Femnet Executive Director Memory Kachambwa said that it is squarely the responsibility of governments to avoid failing its women and girls by prioritizing that which is fundamental in ensuring the provision of their basic rights and services.

"We are concerned that for example as indicated in our report that Kenya still lags behind on critical areas such as health and access to clean water and reliable energy" said Ms Kachambwa.

"These are in fact the most essential needs which the country must be determined to fully address because it is women and children who suffer the biggest impact of their unavailability".

"We would like to emphasize that the realization of gender equality and women's empowerment will only be possible if Kenya addresses the gender components within the SDGs framework. "However, we see the strong focus of universal health coverage within the 'Big Four' agenda as an opportunity to address this by ensuring that specific health needs for women and girls such as sexual and reproductive health and rights are addressed," she said.