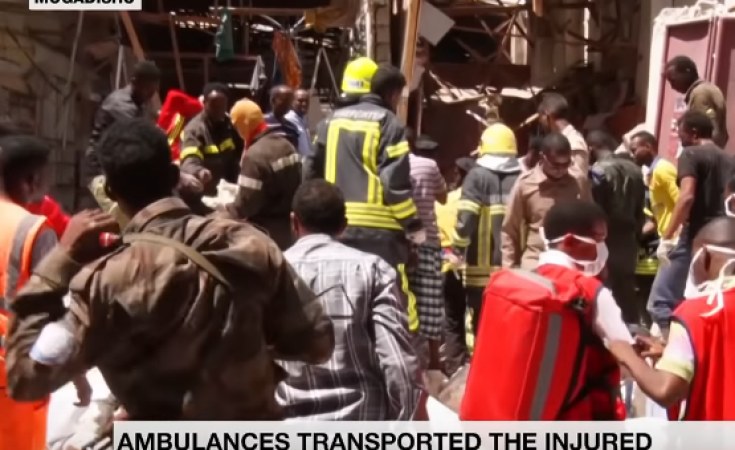 The extremist group al-Shabab has claimed responsibility for a pair of attacks in Somalia. In one, a manager of a Dubai-based ports company was shot in the head. In Mogadishu, a car bomb went off in a marketplace.

The first incident took the life of Paul Anthony Formosa, a Maltese national who was the manager of the port of Bosaso in semi-autonomous Puntland state for P&O Ports, a subsidiary of the Dubai-based DP World.

P&O Ports acknowledged that one of its employees was killed and three others injured in an "incident" Monday at its operations in Bosaso Port. The company said that an investigation is ongoing.

"Three other employees have been injured in this morning's incident, and all are currently receiving medical treatment," read the statement.

The al-Qaida-linked al-Shabab extremist group has taken claim for the attack.

"We are behind the operation ... we had warned him but he turned a deaf ear. He was illegally in Somalia," said spokesman for al-Shabab's military operations, Abdiasis Abu Musab.

P&O Ports has sparked friction with Mogadishu over its development of ports in Berbera in breakaway Somaliland -- whose independence is not recognized -- as well as Puntaland.

Many of Somalia's federal states have aligned with the United Arab Emirates, while the central government is perceived as pro-Qatar, in the Gulf crisis pitting Arab powers against each other.

Puntland is a region of northeast Somalia on the Gulf of Aden.

Al-Shabab also claimed responsibility for the second incident, in which a car bomb went off in Mogadishu killing 11 people.

"The blast occurred close to Mogadishu mall and it has caused death and destruction. Nine civilians were confirmed dead and several others are wounded," according to police officer Ahmed Moalin Ali.

He said some of the victims died in a building that collapsed as a result of the blast in the Hamarweyne market.

"I saw the dead bodies of four people recovered from the debris of a collapsed building and three others were strewn dead outside after the blast had blown them," said shopper Munira Abdukadir.

Somalia has not had an effective central government since the 1991 overthrow of president Siad Barre's military regime which began decades of chaos, including an insurrection by the Shabab since 2006.

The extremist group once controlled large swaths of the countryside and the capital, however they were chased out of Mogadishu by the 22,000-strong African Union peace-enforcement mission, AMISOM in 2011, and have since abandoned many strongholds.

Somali Twin Car Bomb Death Toll Rises
Tagged:
Copyright © 2019 Deutsche Welle. All rights reserved. Distributed by AllAfrica Global Media (allAfrica.com). To contact the copyright holder directly for corrections — or for permission to republish or make other authorized use of this material, click here.