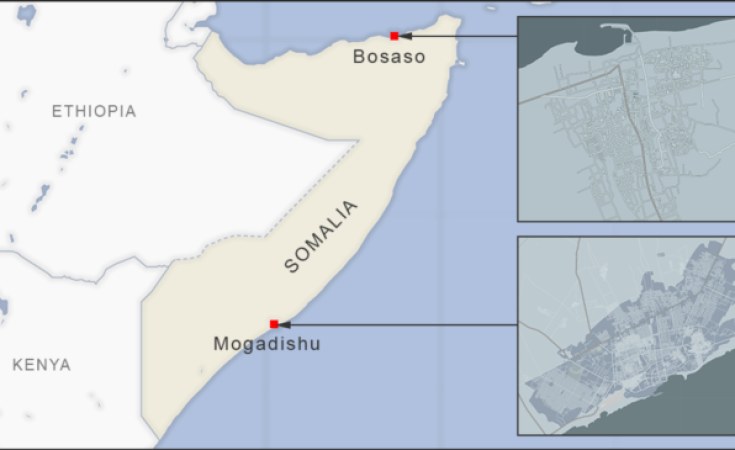 VOA
A map showing the locations of the two attacks.
Voice of America (Washington, DC)

The Islamist al-Shabab group has claimed responsibility for two attacks in Somalia Monday.

The terrorist group said one of its gunmen shot dead the manager of a Dubai-owned port in Somalia's semi-autonomous region of Puntland. Three other people were wounded in the incident.

Mohamad Dahir, a local security official, told the French news agency AFP, "An armed man shot and killed Paul Anthony Formosa who was the construction project manager for DP World. He was killed inside the port and the security forces also shot the killer on the spot."

"We are behind the operation," Abdiasis Abu Musab, a spokesman for al-Shabab's military operations told Reuters. "We had warned him, but he turned deaf ear. He was illegally in Somalia."

An al-Shabab statement said the attack at the port was "part of broader operations targeting the mercenary companies that loot the Somali resources."

DP has signed a 30-year contract to develop the Bosaso Port. The Associated Press reports the development deal is worth $336 million.

Police officer Ahmed Moalin Ali told AFP that terrorists parked a vehicle loaded with explosives near a mall "to kill the innocent civilians."

AFP said al-Shabab claimed responsibility for the capital city attack in a statement on a pro-al-Shabab website.

Somali Twin Car Bomb Death Toll Rises
Tagged:
Copyright © 2019 Voice of America. All rights reserved. Distributed by AllAfrica Global Media (allAfrica.com). To contact the copyright holder directly for corrections — or for permission to republish or make other authorized use of this material, click here.