Nigeria: Corruption Is Difficult to Fight in a Country Like Nigeria - Buhari 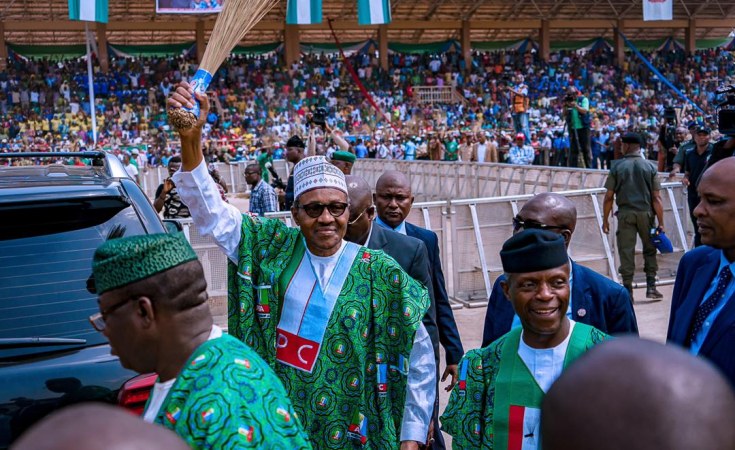 The Guardian
President Muhammadu Buhari in Ekiti.
The Guardian (Lagos)
By Ibukun Ogunkolade

President Muhammadu Buhari has on Tuesday confirmed that fighting corruption in a nation like Nigeria is a difficult task.

He said this while addressing a large crowd of supporters in Ado Ekiti during his presidential campaign rally in Ekiti state.

Buhari said in spite of the tough time they are having fighting corruption, he would never be discouraged to root out corruption in the nation.

"We are fighting corruption but it has not been easy. But we told the security agencies to keep tab on those on our watching list and ensure that no stone is left unturned to ensuring that those who have cases to answer do not escape justice."

"As part of our promises, we are building roads, rail lines, and fighting corruption. We introduced Treasury Single Account and increased power supply, so Nigerians can have their own businesses."

Speaking also at the event was the Vice President, Yemi Osibanjo, he criticized the People's Democratic Party for spending money lavishly for the past 16 years.

"Buhari built three refineries as Minister of Petroleum under military era. No government has ever added one, not even during the 16 years of PDP.

"A sum of $383 billion was got from oil between 2010 and 2014 under Dr Goodluck Jonathan but achieved nothing for the country."

The National Chairman of the All Progressives Congress, Adams Oshiomhole, said it would be a big mistake if Nigerians elect the PDP presidential candidate, Atiku Abubakar, in the February 16 poll.

In his remark, the National Chairman of the party, Adams Oshiomhole, said it would be a big mistake if Nigerians elect the PDP presidential candidate, Abubakar Atiku in the February 16 poll.

The Ekiti state governor, Kayode Fayemi, promised that the President will win in Ekiti state as he will get 90 per cent of the votes from the state on February 16.

He also urged residents to vote for President Buhari in the coming election.

"The government is planning to dualise Ado-Akure road, complete the federal housing units, the federal secretariat and the Lagos-Kano rail line, so we have no option than to return President Buhari, because Ekiti people are progressives."

Previous Story
Sirleaf-Johnson Arrives in Nigeria, to Visit Polls Stakeholders
Next Story
Campaign Promises - I Have Not Betrayed Nigerians - Buhari

Campaign Promises - I Have Not Betrayed Nigerians - Buhari

Nigerian Election Office Burnt Down in Plateau State
Tagged:
Copyright © 2019 The Guardian. All rights reserved. Distributed by AllAfrica Global Media (allAfrica.com). To contact the copyright holder directly for corrections — or for permission to republish or make other authorized use of this material, click here.