UNFPA Ethiopia/Meron Negash
In Ethiopia, "uncut girls’ clubs" have been formed, in which girls help to educate their peers, encourage families to exchange their views on FGM, and speak up for girls’ rights in the community.
New Democrat (Monrovia)

Equality Now, a human rights advocacy group has called on the Liberian government to act on anti-Female Genital Mutilation, FGM, laws that have elapsed.

The immediate past president Ellen Johnson Sirleaf issued an executive order in January 2018 banning the practice for a year as she prepared to leave office.

The one-year order has since expired with the George Weah-led government yet to make any commitments to extend it, a move that worries Equality Now, as expressed in a press conference last week.

The group particularly lauded the efforts of traditional leaders in liaising with relevant pressure groups and stakeholders to seek a permanent solution to the act that is prevalent in conservative parts of the West African country.

Equality Now is an international human rights organization that has been using the law to protect and promote the rights of women and girls around the world since 1992.

FGM is largely banned across the sub-region and through much of sub-Saharan Africa. Activists hold that cases of cuttings are undertaken but often clandestinely.

A deadly incident was reported in Burkina Faso last year when girls suffered complications and some died from an operation that went bad. Governments have usually promised to bring perpetrators to book.

Below is the January 23 statement issued by Equality Now:

We acknowledge with keen interest the one year existence of Executive Order #92 issued by former President, Ellen Johnson Sirleaf on January 19, 2018 which among others banned the practice of Female Genital Mutilation for girls under age 18.

The Executive Order has been considered by many including civil society actors as a step forward in the quest of ending FGM in Liberia. We recognize the efforts of all civil society actors, the press, relevant government ministries and agencies and our regional and international partners whose selfless work around ending FGM in Liberia contributed to the issuance of the Executive Order.

The Executive Order has not been effective as anticipated over its one year of existence as a law mainly due to lack of knowledge on the existence of the ban and lack of a coordinated multi- sectoral implementation of the ban by state agencies.

It has been noted that even with the existence of the Executive Order, there has been an increase in the number of bushes with practice extending to 11 counties from the previous 10 counties, the newest being Grand Gedeh County.

Despite these challenges at least one noticeable achievement was made. The National Traditional Council of Chiefs and Elders of Liberia along with the Liberia National Police in September 2018 intervened and saved over hundred school going girls who were forcible recruited and were at the brink of being subjected to FGM in Nimba County and arrested six (6) practitioners responsible.

That was as result of calls made by members of the public and press statement issued by Women Solidarity Inc and He4She Crusaders Liberia giving the government 72 hours ultimatum to restore the liberties of the girls. On this count, we say thanks to the NTCCEL and LNP.

At this point, Ladies and Gentlemen, our concern is focused on the expiration of the one year duration of the Executive Order as of January 18, 2019 which in effect decriminalizes the act of Female Genital Mutilation in Liberia once again.

During the 123rd Session of the Human Rights Committee in Geneva, Switzerland the government committed itself through a statement by the Deputy Minister of Justice to protect and promote the human rights of its citizens including fighting against all harmful traditional and cultural practices as stated in The Liberian constitution under article 5b.

Liberia has also signed and ratified several regional and international human rights instruments including The Protocol to the African Charter on Human and Peoples' Rights on the Rights of Women in Africa (Maputo Protocol), The African Charter on the Rights and Welfare of the Child and The Convention on the Elimination of All Forms of Discrimination against Women(CEDAW), which all call upon the state to ensure that women and girls are protected from all forms of violence and discrimination including Female Genital Mutilation.

In view of the above and in the absence of a specific legal framework against FGM in Liberia, we passionately call on the head of the National Traditional Council of Chiefs and Elders of Liberia, Chief Zanzan Kawor and his able lieutenants to ensure that there is a restraining mechanism put in place to disallow traditional practitioners to forcibly subject women and girls to the practice of Female genital mutilation as a permanent solution to the situation is been sought.

Most importantly, we are calling on President George M. Weah, Vice President Jewel Howard - Taylor along with the 54th legislature to ensure a permanent protection of women and girls against the practice of Female Genital Mutilation in adherence to the many regional and international human rights instruments that Liberia subscribes to by legislating a law prohibiting the practice in the country in a soonest possible time. The human rights of women and girls like all others cannot be compromised under this popular regime of the Liberia people.

Finally, we thank everyone who has been engaged with the campaign to end FGM in Liberia over the years while at the same time we like to encourage all of us to keep the campaign on and active till a permanent solution is achieved.

We are also calling on the regional and international communities to not let Liberia down in this campaign against FGM as we encourage their support in all forms and at all levels of the advocacy.

War On FGM Is Being Won As Community Shifts Mind

Calls for Nigeria to Enact Laws on Female Genital Mutilation 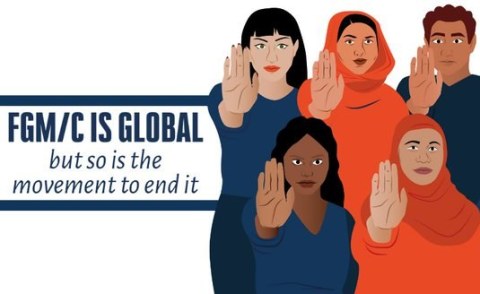 World 'Woefully' Underestimates Female Genital Mutilation - Study
Tagged:
Copyright © 2019 New Democrat. All rights reserved. Distributed by AllAfrica Global Media (allAfrica.com). To contact the copyright holder directly for corrections — or for permission to republish or make other authorized use of this material, click here.