Nigeria: I Am On Rescue Mission to Save Nigeria, Says Atiku 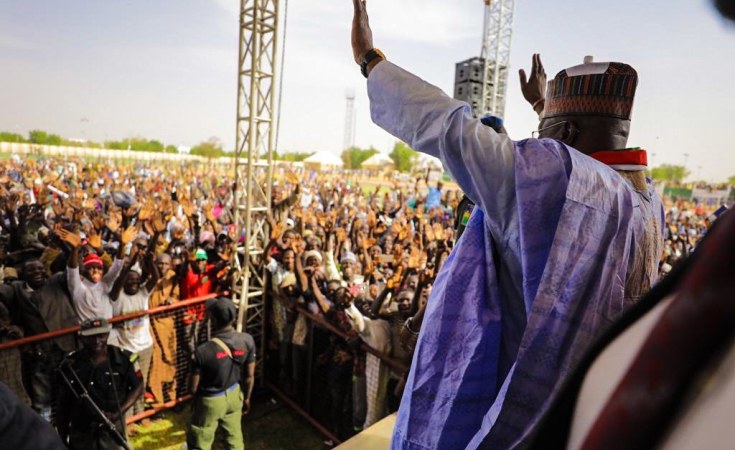 Maiduguri — The presidential candidate of the Peoples Democratic Party (PDP), Alhaji Atiku Abubakar, has said he is on a rescue mission to save Nigeria from sinking further.

Speaking in Damaturu, Yobe State, Wednesday during the PDP presidential campaign, the former vice-president berated the ruling All Progressives Congress (APC) for dragging the country backward since it was voted in 2015, adding that APC is a failure.

The PDP presidential candidate, who was hailed by mammoth crowd of party's supporters, lamented that the APC had misgoverned the country by making promises which were not fulfilled.

He said despite their promise to make things better, they have made worse.

Atiku added that in the provision of security, they have failed, "they failed to create jobs for our teeming youths and today, inflation has taken over," adding that instead of admitting their failings, they continue to tell the people of these country lies.

The PDP presidential candidate declared that: "The PDP has come to rescue the people of the country from the suffering which the APC has put us into."

Also speaking at the rally, the National Chairman of the PDP, Prince Uche Secondus, urged Nigerians to vote for Atiku in order to rescue the country from hunger.

He said: "The country is currently suffering from hunger and insecurity. There is a need for a competent and well experienced Nigerian to come on board to save us. As we are all aware, Nigeria is in distress and we are in dire need of a well-connected leader to rescue us."

In his address, the Director General of Atiku Campaign organisation, Mr. Buba Galadima, urged youths, women to vote President Muhammadu Buhari and the APC out of power in the next general election, adding that APC had failed to deliver on all its 2015 campaign promises.

He said: "The APC promised Nigeria a lot of things. They promised us security. Then we have security problems not only in the North-east, but have now extended to North Central and even the Northwest. APC has failed because security has worsened."

Galadima also stated that people are dying of hunger because the economy has gone terribly bad, saying: "Hunger is serious affecting people in the country today. Nigeria is today the world poverty capital.

"We need a president that will fix the economy, create jobs and unite Nigerians," "This APC government must go because events of the past three years have shown that they don't have solutions to all these problems. We must vote this government out and elect Atiku as our next president.

"My people of Yobe State and Northeast we must vote out Buhari. Atiku is the solution to Nigeria's problem."

The PDP leader noted that the people in crowd seen today (yesterday) in Yobe State, "are our genuine supporters and that is a clear indication that people are tired of the current government.

"We are here to receive your blessings and permission to talk to our people and seek their votes for Atiku and Peter Obi."

Previous Story
Buhari vs Atiku - the Groundswell Favouring the Articulated and Business-Minded
Next Story
Vote Me, I Won't Change, Buhari Tells Nigerians

Buhari vs Atiku - the Groundswell Favouring the Articulated and Business-Minded

Nigerian Election Office Burnt Down in Plateau State
Tagged:
Copyright © 2019 This Day. All rights reserved. Distributed by AllAfrica Global Media (allAfrica.com). To contact the copyright holder directly for corrections — or for permission to republish or make other authorized use of this material, click here.