Africa: AU launches a tool to gauge Women's Participation in Peace and Security 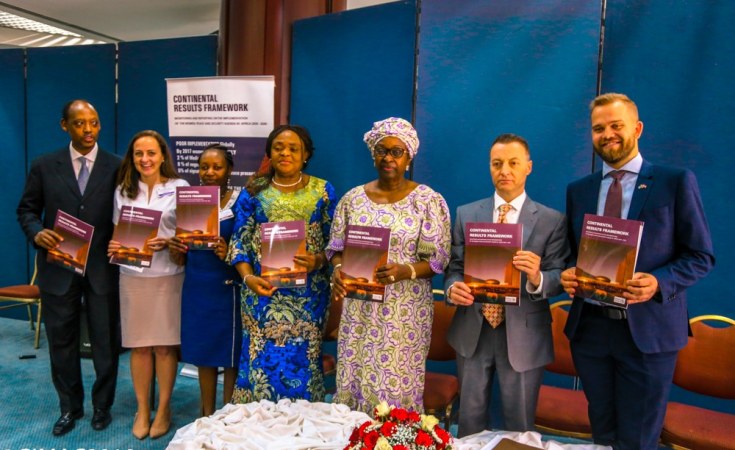 The launching ceremony took place alongside the Gender is my Agenda Campaign ( GiMAC) that took place for two days 03-04,February, 2019, in UN Economic Commission for Africa, Addis Ababa. The Continental Result Framework, which was adopted last year in May by the African Union Peace and Security Council, will be used for a periodic report on Women Peace and Security Agenda in Africa.

Africa's Continental Result Framework consists of 4 major pillars of Peace and Security (4Ps) Prevention, Protection Participation and Post conflict rebuilding. Under the four pillars it consists of 28 indicators and new thematic focus to cover emerging security threats. It also includes 13 specifically tailored for African Union Commission to be able to produce a continental report on Women Peace and Security Agenda in the Continent.

Globally, Women in Peace and security Agenda was adopted at the level of United Nation as United Nation's Resolution 1325. The Resolution in a nutshell recognizes the disproportionate and unique impact of Conflict on Women. UNSCR 1325 is a standalone resolution promoting equal and full participation of women in conflict resolution. It goes further than framing "Women as Victims" but also "Women as Peace Builders".

17 years from the adoption of the resolution, data shows that the implementation globally is so poor. So far women's engagement stands at 2% of mediators, 8% negotiators, and 5% signatories of peace deals. Africa's contribution to this is minimal, not known due to the absence of data and evidence on the issue. The office of the Special envoy, established in 2014 is among others mandated to bridge the gap between policy commitments of member states.

"The office is not an implementer, but looks into what is on the ground, identifies gaps and facilitate parties to come together". The Special Envoy on Women, Peace and Security. H.E. Mme Bineta Diop said further calling the women themselves to organize and pursue the Agenda- Women, Peace and Security. The development of the Continental Result Framework took four years in which series of deliberation and consultative meetings took place with member states, UN agencies, civil society and international NGO's working on the issue of the Women Peace and Security.

UNDP, UNWomen, USAID and Norwegian Ministry of Foreign Affairs funded the four year project of developing the Framework. The partners' attended the launching ceremony committing for further collaboration with the office of the Special Envoy towards the implementation of Women Peace and Security Agenda in Africa.

Tagged:
Copyright © 2019 African Union. All rights reserved. Distributed by AllAfrica Global Media (allAfrica.com). To contact the copyright holder directly for corrections — or for permission to republish or make other authorized use of this material, click here.