South Africa: Batohi and NPA to Get More Teeth With Scorpions-Like Anti-Corruption Unit 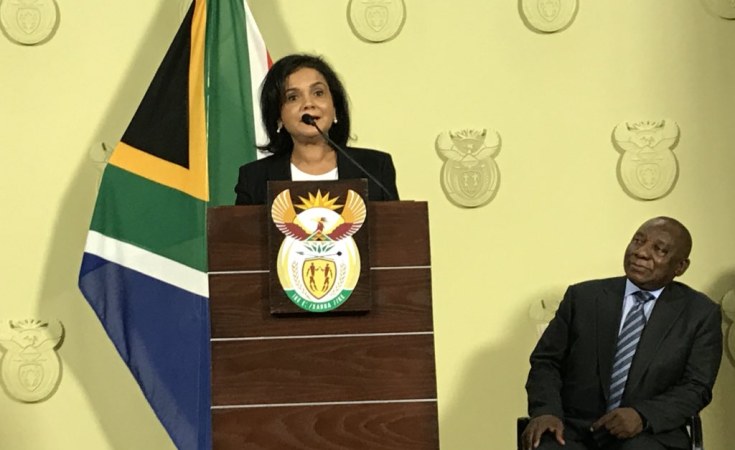 GCIS
Advocate Shamila Batohi after her appointment as the new head of the National Prosecuting Authority.
News24Wire (Cape Town)

Ramaphosa told both Houses of Parliament during his State of the Nation Address on Thursday that tackling corruption was crucial in dealing with poverty, unemployment and inequality.

"The revelations emerging from the Zondo commission of inquiry into state capture and other commissions are deeply disturbing, for they reveal a breadth and depth of criminal wrongdoing that challenges the very foundation of our democratic state.

"We commend these commissions for the work they are doing, often under challenging circumstances, to uncover the truth."

While the commission would in time make findings and recommendations in line with its mandate, evidence of criminal activity that emerges must be evaluated by the criminal justice system, Ramaphosa said.

"Where there is a basis to prosecute, prosecutions must follow swiftly and stolen public funds must be recovered urgently.

"To this end, we have agreed with the new National Director of Public Prosecutions, that there is an urgent need to establish in the office of the NDPP an investigating directorate dealing with serious corruption and associated offences, in accordance with section 7 of the NPA Act.

"I will soon be promulgating a proclamation that will set out the specific terms of reference of the directorate.

"In broad terms, the directorate will focus on the evidence that has emerged from the Zondo commission of inquiry into state capture, other commissions and disciplinary inquiries."

It would identify priority cases to investigate and prosecute, and would also recover assets identified to be the proceeds of corruption.

The Directorate would bring together a range of investigatory and prosecutorial capacity from within government and in the private sector under an investigating director reporting to the NDPP, Ramaphosa added.

Batohi, a guest in the president's box on Thursday night, smiled as Ramaphosa continued with his speech.

She assumed office on February 1.

Previous Story
Country to Go to the Polls On May 8, Says Ramaphosa
Next Story
State-Owned 'Land Parcels' Identified for Expropriation - Ramaphosa

Country to Go to the Polls On May 8, Says Ramaphosa