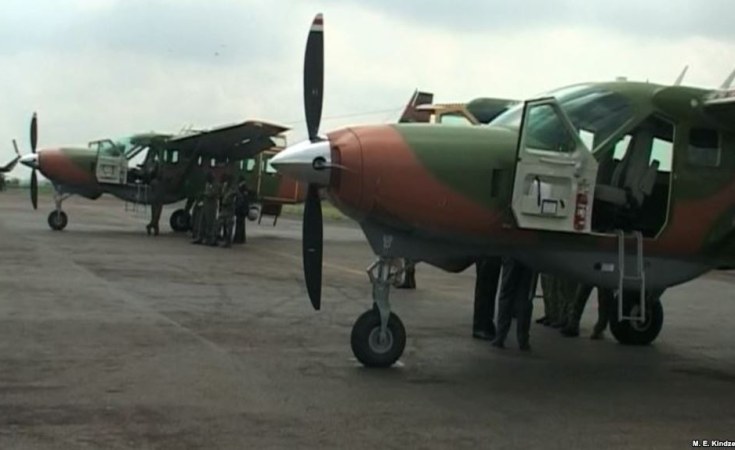 Moki Edwin Kindzeka
Aircrafts donated by America at the Yaounde military air base in Cameroon, May 11 2018
Voice of America (Washington, DC)

Despite announcing plans to trim military support for Cameroon's government over its alleged human rights violations, key U.S. officials say the United States will continue partnering on security efforts. But a Cameroon official contends the cutback could jeopardize the fight against extremism in the region.

U.S. Ambassador Peter Henry Barlerin assured that the U.S. was "not going to stop security cooperation with Cameroon," the Associated Press reported him saying, after he met Thursday with Cameroon government spokesman Rene Emmanuel Sadi.

"Relations between Cameroon and the United States are excellent and longstanding," Barlerin said, "and we aim to continue that relationship."

His comments in Yaounde, the capital, came after it was reported Wednesday that the U.S. government was cutting about $17 million in military aid to the government of President Paul Biya.

Also Thursday, the head of U.S. Africa Command, Marine Corps General Thomas Waldhauser, said at a Senate Armed Services Committee hearing in Washington that Cameroon has "been a good partner with us counterterrorism-wise, but you can't neglect the fact that … there are alleged atrocities," The Washington Post reported.

Waldhauser also told the committee that Africa Command would sustain its mission "to train the counterterrorism forces in Cameroon that deal with Boko Haram," the Islamist militant group.

The State Department and Pentagon "recently assessed our security relationship with Cameroon," according to a State Department email sent to VOA Thursday (and shared a day earlier with The Washington Post.)

Despite "the great cooperation" in fighting Boko Haram and "in restoring maritime security in the Gulf of Guinea," the email said, the U.S. government has "terminated" funding for four defender-class boats, nine armored vehicles, a radar system and helicopter training, among other things.

"We do not take these measures lightly, but we will not shirk from reducing assistance further if evolving conditions require it," the State Department email said.

It added that the measure was intended to press Cameroon "to show greater transparency in investigating credible allegations of gross violations of human rights security forces, particularly in the northwest, southwest and far north regions.”

Cameroonian security forces – grappling with Boko Haram in the far north and the Ambazonian separatist movement in two English-speaking regions in the west – have been accused of committing serious violations against citizens.

Last year, Cameroon's government rejected a report by Amnesty International, saying its accounts of torture at the hands of security forces amounted to "a web of false allegations."

The current Amnesty International statement urged the Trump administration to "press other donors of security assistance to review their programs and insist on accountability and reform within the Cameroonian security forces.”

France announced Thursday that it would maintain its support.

A spokesman for the Ambazonian separatist movement also praised the U.S. move and encouraged other Western countries to pull back support, too.

"What the U.S. has done, it came a little bit late – but we appreciate it and we hope that every European nation [and] Canada will follow suit," Chris Anu, the movement's secretary of state, told VOA. "Because if that is not done, the regime in French Cameroon will decimate everything that is in southern Cameroon before the world comes to know about it."