Zimbabwe: Farmers Secure Land and Food Thanks to 'Eyes in the Skies' 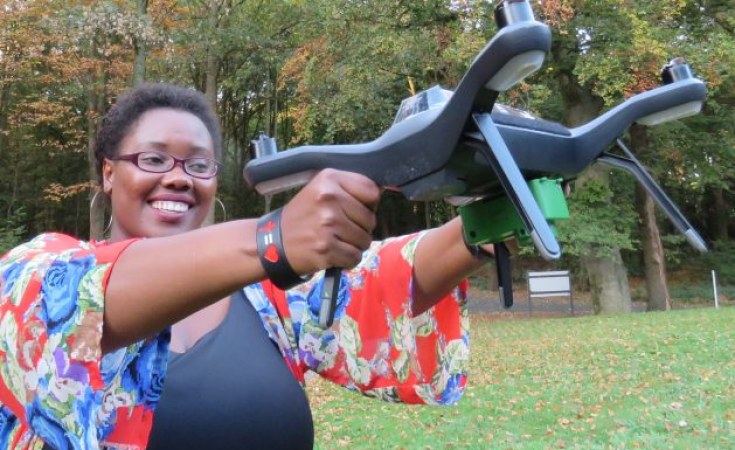 Photo: Busani Bafana/IPS
Tanzanian ICT entrepreneur, Rose Funja, shows off one of the drones she uses as a key tool in her data mapping business.
Inter Press Service
By Busani Bafana

Bulawayo, Zimbabwe — Six years ago while wondering how best to use her engineering skills, Tanzanian ICT entrepreneur Rose Funja decided to enter an innovation competition. Years later she has turned a digital idea into a viable business that helps smallholder farmers across the East African nation access credit.

In Tanzania farmers struggle to obtain credit because many do not have bankable assets or a record of performance to offer as collateral. But Funja had an idea to help farmers, particularly women, obtain proof of land ownership that they could use as collateral to access credit.

"A farmer might have a big piece of land, but if they do not have legal claim to it they cannot use it productively," Funja tells IPS.

In 2013, she entered the AgriHack Talent Programme for East Africa, a competition organised by the Netherlands-based Technical Centre for Agricultural and Rural Cooperation (CTA).

Fungi's idea was named second runner-up in the competition and she received a cash prize and mentorship from Buni Innovation Hub in Tanzania. In 2015, with a partner and students from the Bagamoyo University in Tanzania, Funja developed AgrInfo. She began working full-time in the business just a year later.

Now AgrInfo profiles farmers, the size and location of their farms, and the crops they grow on them. This data is then posted onto an online platform that financial institutions can access and use to assess the creditworthiness of farmers and their eligibility to qualify for loans.

"Actionable, real-time information is key in making decisions, especially in farming," says Funja, who has a Bachelor of Science in Computer Engineering and a Master's in Communication and Information Systems Engineering.

The African Development Bank notes that up to 12 million youth enter the job market across the continent each year while only three million jobs are created, leaving many unemployed. However, agribusiness offers innovative approaches for the youth to develop and roll out smart ICT solutions for smallholder farmers.

AgrInfo has been able to help, for a small fee, over 300 smallholder farmers in Tanzania's capital city of Dodoma obtain access to financial institutions after mapping their farms.

"We have helped farmers know what they have and [they have been able to] use their land to access credit and buy inputs," Funja says. Success has come about through trial and error, passion, and through creating value, explains Funja.

Plans are in the pipeline to grow the number of subscribers to the service to one million, and to extend the service to other actors in the agriculture value chain, such as government extension services.

When she first started the business Funja used GIS and hand-held GPS gadgets to gather data.

Then in 2017 she was exposed, through CTA, to the applied use of Unmanned Aerial Systems (UAS) and was trained in the business aspect of operating drones. UAS is based on drone technology and provides information faster and more accurately. Funja went on to become one of the pioneer multi-copter drone pilots in Tanzania.

CTA has collaborated with Parrot, a French drone manufacturer, to support technology start-ups develop precision agriculture in Africa. Running for two years from 2017 till this year, the CTA project aims to help establish approximately 30 enterprises that are run mainly by young entrepreneurs in African countries where there is enabling legislation.

"Considering the fact that in 2017 drones were a new tech for Africa, our project played an important role in establishing an enabling environment," Giacomo Rambaldi, Senior Programme Coordinator at CTA, tells IPS. "It supported the African Union's (AU) appointed High Level African Panel on Emerging Techs in selecting 'drones for precision agriculture' as one of the most promising technologies which would foster Africa's development."

In January 2018, the AU Executive Council recommended that all Member States harness the opportunities offered by drones for agriculture.

Africa should prioritise the adoption, deployment and up scaling of drones for precision agriculture through capacity-building, supporting infrastructure, regulatory strengthening, research and development and stakeholder engagement, says a 2018 report titled Drones on the horizon: Transforming Africa's Agriculture.

The report notes that optimising agricultural profit through increasing productivity and improved yield has been the result of the application of several innovative developments over the years, one of them being the use of drone technology.

"Whilst such interventions and the green revolution in particular, have benefited many developing countries, this has not been the case in Africa. This situation calls for a review of agricultural policies and practices, and an explicit understanding that enabling policies for the promotion of such drone technologies must be formulated," the report recommends.

"A digital application is just a tool, but value sells. If there is no value, there is no business," says Funja.

The Food and Agriculture Organisation of the United Nations says drone technology has great potential to support and address some of the most pressing problems faced by agriculture in accessing actionable real-time quality data. The agriculture sector will be the second-largest user of drones in the world in the next five years, according to research by Goldman Sachs.

Investment in ICTs could play a pivotal role in accelerating Africa's agricultural transformation and can increase both the productivity and income of smallholder farmers, says development consultancy firm Dalberg Global Development Advisors.

"Africa sits on the majority of the world's uncultivated arable land, but unlocking that large agricultural potential will require strategic deployment of ICT capabilities," Andres Johannes Enghild, a consultant at Dalberg's New York office tells IPS. "If new ICT solutions are harnessed well, they could, for example, improve market linkages for farmers and attract international investors."

Despite Africa's agricultural potential, it remains the region with the highest food and malnutrition rates in the world.

Today, farmers have limited access to better agronomic farming practices, an area where ICT can make a major difference. And Funja is of the entrepreneurs making this possible.