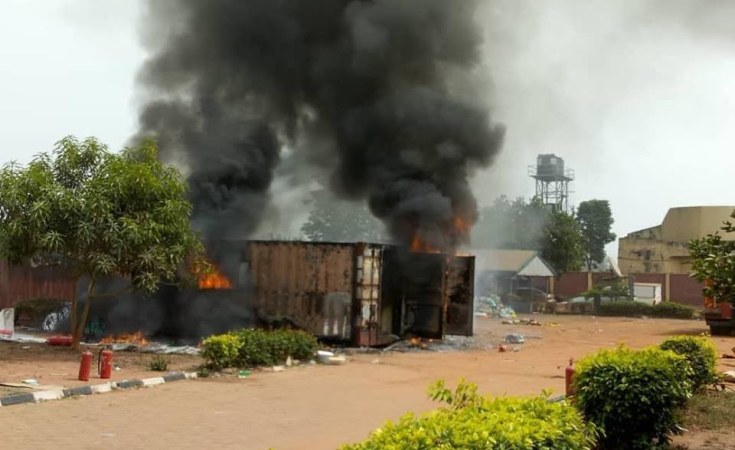 The incident comes two days after the INEC office in Plateau State was destroyed by fire. Other facilities of the commission, including in Abia, have also been damaged by fire weeks before the general election.

The News Agency of Nigeria (NAN) reports that officials of the Anambra Fire Service were still battling with the fire as at the time of filing its report.

Combined personnel of the Police, Nigerian Security and Civil Defence Corps (NSCDC) and the Department of State Security (DSS) were on ground to ensure safety.

Confirming the fire, Nkwachukwu Orji, the Resident Electoral Commissioner in Anambra, said he was yet to ascertain the extent of the damage.

"I don't have the details of how the fire started; all I know is that there was a fire incident involving the containers that house some of our sensitive materials.

"We have to do an assessment before we can ascertain the extent of damage, we have been storing equipment in that facility since 2011," he said.

NAN reports that this incident is the second in the South-east as INEC office in Isiala Ngwa, Abia was penultimate week set ablaze by unidentified persons.

Nigerian Presidential Candidates Sign Another Peace Deal
Tagged:
Copyright © 2019 Premium Times. All rights reserved. Distributed by AllAfrica Global Media (allAfrica.com). To contact the copyright holder directly for corrections — or for permission to republish or make other authorized use of this material, click here.