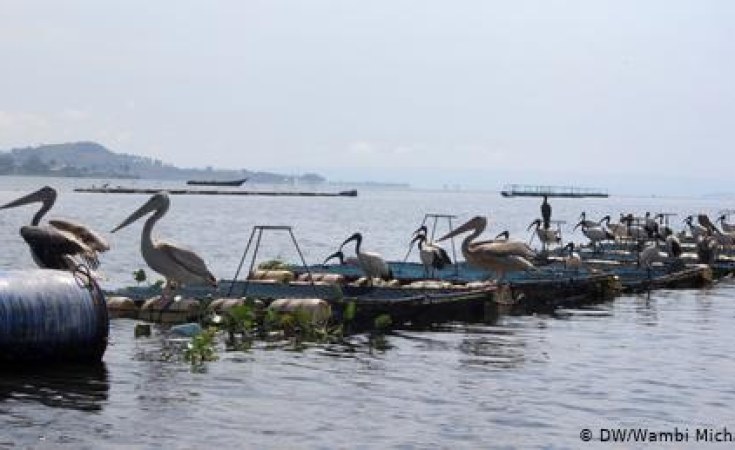 Photo: Wambi Michael/Deutsche welle
Perching birds are a common sight on the floating fish cages of the SON Fish Farm around Bugungu, on the Lake Victoria shoreline.
The Monitor (Kampala)
By Sadat Mbogo

The government has given the green light to two investment groups; one from Hungary and another from China to set up separate multi-billion fish farms around River Katonga area in Mpigi District.

The acting director for fisheries in the Ministry of Agriculture, Animal Industry and Fisheries (MAAIF), Dr Edward Rukunya, said government is ready to offer more than 600 hectares of land in the water catchment area to support the investors' projects.

"The ministry [MAAIF], has a plan to create alternative livelihoods for fishing communities targeting districts surrounding Lake Victoria and other water bodies. As part of the programme, we have linked up with some investors from China and Hungary, who are ready to set up production systems for example establishing fish ponds, fish feeds production machines, fish processing factory and adding value to our fish for better competition on the world market," he said on Monday.

Dr Rukunya said River Katonga area has been identified as one of the potential areas and government will lure investors to establish the fish projects there.

"Lake Victoria waters will also be used when it comes to setting up of fish cages to increase production. We shall provide local farmers with cages to be able to improve on their livelihoods," he said.

He added that the two investments will greatly boost the fish production in Uganda to at least one million metric tonnes. Currently, the country produces 120,000 metric tonnes of fish per year.

Daily Monitor has learnt that Hungarian investors are ready to invest more than Shs22 billion and the Chinese will also inject Shs1.4 trillion in relatively similar separate projects.

However, the local leaders in Mpigi District led by Mawokota South MP John Bosco Lubyayi, questioned how the projects will benefit the local people without destroying the environment.

"These are all good projects, but we need assurance that the investors won't destroy the environment in the targeted area," Mr Lubyayi said.

River Katonga, which has its source in Lukaya, Kalungu District has a length of 220kms. It flows northwards into Lake Wamala. It"s vegetation is mixed Savannah with acacia scrubland or woodlands.

A large portion of the river banks are either permanent or seasonal wetlands. There are also pockets of river line and tropical forests.

Dr Rukunya said any investment of this magnitude has to be done after carrying out an environmental impact assessment.

"The required land is huge and we shall follow all the guidelines to ensure that the planned economic activities don't affect the environment in anyway," he said.

Some 30 million people in East Africa depend on Lake Victoria for their livelihoods, but the continued use of illegal fishing gear is also seriously hurting the lake.

Conservationists have on several occasions warned that if catching immature fish is not checked, Lake Victoria will have its fish stock depleted in the next 30 years.

Will Cage Farming Protect Lake Victoria's Fish?
Tagged:
Copyright © 2019 The Monitor. All rights reserved. Distributed by AllAfrica Global Media (allAfrica.com). To contact the copyright holder directly for corrections — or for permission to republish or make other authorized use of this material, click here.