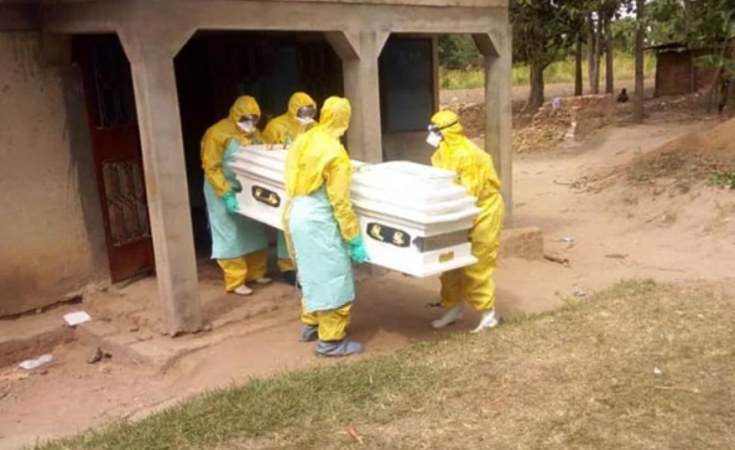 Ministry of Health Uganda/East African
Health workers carry the corpse of a man suspected to have died of disease with Ebola-like symptoms for burial in Tororo District, Uganda on February 12, 2019.
The East African (Nairobi)
By Dicta Asiimwe

Uganda's Health ministry on Wednesday said there is no Ebola case in the country after blood tests from a man suspected to have died of the haemorrhagic fever was found to be negative.

"Samples taken off from the deceased tested negative for Ebola. Ministry of Health and partners remain vigilant to prevent importation of any case of Ebola into Uganda. There is no confirmed case of Ebola," the ministry tweeted on Wednesday.

13 individuals from the eastern district of Tororo had been quarantined on Tuesday over fears that they might had contact with the victim.

They had repatriated the body for burial from Democratic Republic of Congo, which neighbours Uganda to the west, where Ebola has claimed 500 lives.

The Ugandan man died of a disease with Ebola-like symptoms.

"Thirteen people from Tororo went to collect the body and passed through the border check point in Zombo district and proceeded to Tororo," reads a joint statement by the ministry of health and World Health Organisation (WHO).

Another perfect storm in DR Congo?

The 46-year-old had been admitted at a hospital in eastern Bunia town in DR Congo since November 2018 complaining of chest pain and cough. He died on February 8, 2019, according to the statement.

Bunia is in Ituri province where WHO says a few suspected Ebola cases have been reported.

The man, whose name has been withheld for fear that it would reveal the identity of quarantined relatives, died of pulmonary tuberculosis, according to the death certificate issued by the government

He had been living in DR Congo for the past eight years, where he worked as a mason.

The government supervised his burial on Tuesday.

There are fears that DR Congo's porous borders, militia groups, ethnic violence and weak health infrastructure could make it easy for Ebola to spread to the neighbouring countries.

Regular travellers into the country from DR Congo are required to wash their hands in chlorine at border posts as one of the measures to prevent the virus from spreading.

Ebola Survivor Tells How She Denied Disease Existed
Tagged:
Copyright © 2019 The East African. All rights reserved. Distributed by AllAfrica Global Media (allAfrica.com). To contact the copyright holder directly for corrections — or for permission to republish or make other authorized use of this material, click here.