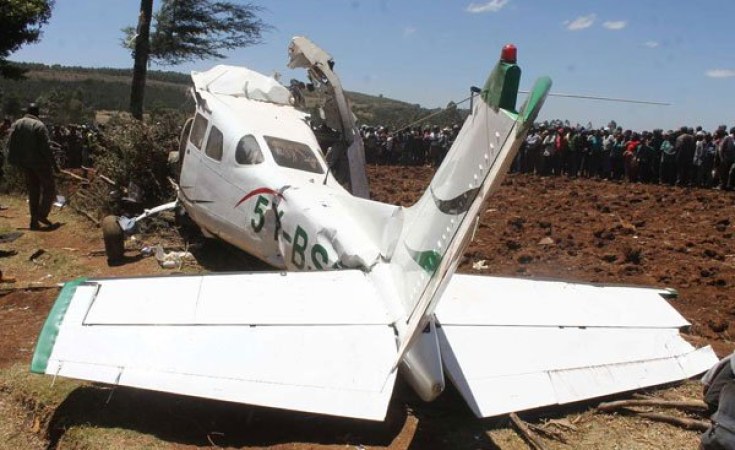 Photo: John Njorge/Daily Nation
The wreckage of the aircraft following the crashed in Londiani, Kericho County on February 13,2019. Five people were killed.
The Nation (Nairobi)
By Eric Matara

The crash occurred after the Cesna 206-5-Y BSE aircraft lost control and crashed-landed in the private farm, about nine kilometres from Londiani town on Wednesday at 11am.

Police said the aircraft is registered under the name of Mr David Mutava Mulwa. However, by Wednesday evening, it was not clear whether Mr Mulwa was the pilot at the time of the accident.

Three of the foreigners were identified as Americans, two women and a man, while one remained unidentified.

According to police, the aircraft was ferrying the passengers, believed to be tourists, from Ol Kiombo in the world famous Masai Mara to Lodwar in Turkana County.

Eye witnesses said the pilot appeared to have lost control of the aircraft before it crashed.

"I saw the light aircraft swaying in the air before it came down. The next minute, it crashed into a tree," a villager, Mr Timothy Koech recounted.

Another resident James Tanui said the loud bang attracted a crowd to the scene but they could not save the occupants who had all died by then.

"At the scene, we realised the occupants had died instantly. There was nothing we could do to save them," said Mr Tanui, who was among the first people to arrive at the scene.

Hundreds of residents watched in shock as police retrieved the victims' bodies from the mangled wreck.

The accident came eight months after a FlySax plane crashed in the Aberdares, killing ten people in June last year.

The aircraft had left Kitale airstrip in Trans Nzoia County for Nairobi at 4.05pm on Tuesday, June 5, 2018 but lost contact with the control tower at 5.20pm before it was reported missing. Its wreckage was later found after a three-day search.