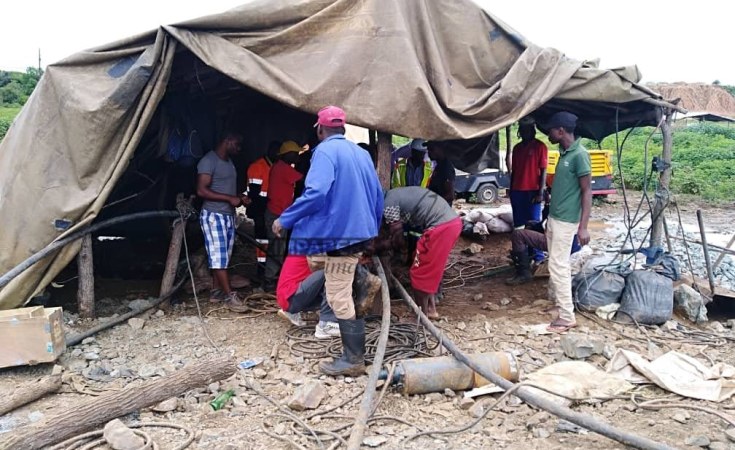 @JMafume/Twitter
A number of stakeholders combined their efforts and successfully pumped out water from two interlinked tunnels, and work to retrieve the bodies is expected to start.
The Herald (Harare)

President Mnangagwa has declared a State of Disaster the incident in which between 60 and 70 artisanal miners are believed to have perished after mining shafts at Cricket No 3 and Jongwe Mining Cooperative mines in Mhondoro-Ngezi were flooded on Tuesday.

Hopes of finding any of the miners alive have since faded after they were trapped underground by water following heavy rains that pounded the area during the night.

A number of stakeholders combined their efforts yesterday and successfully pumped out water from two interlinked tunnels, and work to retrieve the bodies is expected to start today.

In a statement yesterday, Local Government, Public Works and National Housing Minister July Moyo said the number of artisanal miners who could have been trapped after shafts were flooded was estimated at between 60 and 70.

He said Government required at least $200 000 to pump out the water, feed bereaved families and teams on the ground, transportation and burial of the victims in their respective districts.

President Mnangagwa declared the incident a State of Disaster in terms of Section 27 (1) of the Civil Protection Act, Chapter 10.06.

The Act provides that in any time it appears to the President that any disaster is of such nature and extent that extra-ordinary measures are necessary to assist and protect the affected, he may declare a state of disaster within an area defined in the declaration.

Minister Moyo paid tribute to corporates that assisted with human resources and equipment, including Zimplats, Golden Valley and RioZim.

“However, it is clear that at Cricket 3 Mine where four youths are suspected to have been trapped, it will take longer to retrieve the bodies considering the depth of the flooded mine,” he said.

“Given the magnitude of the disaster, we kindly appeal to individuals, development partners and the corporate world for assistance in cash and kind.”

Minister Moyo said donations in kind should be channelled through the Department of Civil Protection housed on the 7th Floor of Makombe Building in Harare or the Mhondoro-Ngezi District Administrator’s Office in Kadoma for purposes of accountability and transparency.

Minister Moyo said further clarification with regard to cash donations should be directed to the Deputy Accountant General on +263-242-763027 or email: mkondomi@gmail.com. Enquiries can also be directed to the Ministry of Local Government, Public Works and National Housing, Department of Civil Protection at Makombe Building or numbers +263712236384 and +263242791287.

Further enquiries can also be made  at the Ministry of Finance and Economic Development at the New Government Composite Building, Corner Samora Machel Avenue and Simon Muzenda Street or call +263-242-763027.

Mines and Mining Development Deputy Minister Polite Kambamura said preliminary assessments indicated that the miners were operating outside the provisions of the law.

“These miners were operating along a water channel which is against the Mines and Minerals Act,” he said. “They tried to block the water channel 300 metres away from where the shafts are, but there was a flood leading to their submersion.”

Deputy Minister Kambamura said Government was going to pursue safe mining campaigns in all areas where there were small-scale miners.

He said there was need for reaction teams which would be located in strategic points in the country.

Mining operations, according to Mines and Minerals Act, should be at least 200 metres away from a water channel.

Deputy Minister Kambamura dismissed reports that Government had reacted slowly to the disaster.

“The Civil Protection Department and people from the ministry have been on the scene since the day disaster struck,” he said. “Our chief mining engineer Mr Munodawafa and his team just came from office straight to the scene on time and started working with CPU guys and have not returned to their respective homes since then.”

The draining of water from the seven shafts was being done yesterday, with joint efforts from various mining companies including Zimplats, RioZim, Mrasta and small-scale miners.

“In less than two hours we de-watered close to eight metres, meaning if we continue at this rate we might now connect slurry pumps so that there is clear passage for people to search for the victims,” said Eng Munodawafa. “Therefore, if we maintain this rate tomorrow (today) we might start retrieving the bodies.”

Mashonaland West Provincial Affairs Minister Mary Mliswa-Chikoka said the tragedy was a big wake up call for mining authorities and the miners on the need to adhere to safety standards.

“What happened is absolutely tragic,” she said. “My condolences to the families that have lost their loved ones through this accident. We now need to consider the health and safety aspect of our artisanal miners.”